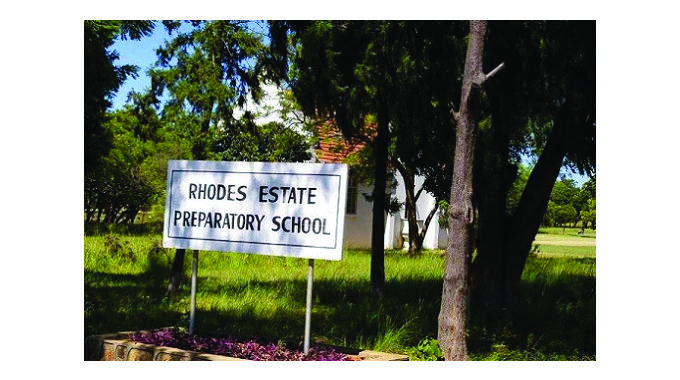 Mlibazisi Bhebhe, the fugitive assistant boarding master at Rhodes Estate Preparatory School (Reps) in Matobo District accused of raping two Grade Seven pupils at the school is said to have been unqualified to hold the position.

Bhebhe (32) a married father of three, is said to have possessed very little educational qualifications to enable him to hold a critical post of being an assistant boarding master in charge of watching over pupils who live at the school’s boarding facilities.

Impeccable sources say Bhebhe came in as an ancillary worker who started off in the school kitchen where he was assisting but rose to become an assistant boarding master, a position that naturally requires five O-level passes and a diploma in the education field, nursing or related which Bhebhe did not have.

“He was working in the kitchen where he was helping out. He then moved to the hostels as a promotion despite his lame qualifications. No one really paid much attention to that and he worked in the dormitories until we heard of his case,” said a source at the school.

The school is said to enrol its own workers but paid very little attention to qualifications in many cases.

“He was hired by the School Development Committee and many such workers started off as ground staff, others moved according to the educational qualifications they possessed but many didn’t have any, but they were promoted.

At one point, we advocated that the school hire a qualified matron but that was not done and Bhebhe continued despite his lack of qualifications. When you put someone there it means you trust their capabilities based on their qualifications too,” said a source within.

However, the rapid deterioration of standards at the formerly prestigious private school saw them employing unqualified and semi-qualified people. In 2019, the then school head, deputy and some teachers allegedly secretly opened a foreign currency account through which they siphoned close to US$4 000 and 10 000 pula in school fees payments from foreign students. This was picked up during an audit. The school which used to boast of well-manicured sports fields, a swimming pool, functioning clinic with a nurse, is now a shadow of its self.

Commenting on the rape case, Ministry of Primary and Secondary Education Director of Communications and Advocacy Mr Taungana Ndoro said they encouraged schools to practice due diligence before engaging law enforcers.

“We tell the schools to practice due diligence before they go to the police with such matters, but here its abuse from an ancillary staff member employed by the SDC. When things like this happen in our schools, we as the ministry get the report first before it even goes to the police because we also want to establish whether it actually transpired or not. Sometimes we may rush to the police and end up with unlawful prosecution. So, we also do our investigations as a school, a lot of reports were written then recommendations led us to say this was not just an ordinary crime, it’s not a violation of the Educational Policy but that of the Constitution so it needs to go to the police,” said Mr Ndoro.

Mr Ndoro said the matter at Reps was not an infrastructural issue where the hostels were initially built for boys but incorporated girls, but a moral one.

“We have several schools that have introduced girls into their systems without much amendment to the existing infrastructure. This is a behavioural issue on the part of the perpetrator, not a structural one. We have St George’s, Chishawasha, St John’s College and so on, they introduced girls and we have not reported any cases of rape.

“The perpetrator took advantage of the young girls. Even if we had barricaded the door that separates these learners, if he had the intention, he would have done it either way. It is folly to say the rape occurred because the girls were very near the matron’s room. One can commit a crime from a mile away if they want to. The person will have a bad intention naturally,” he said.

He said the Ministry of Primary and Secondary Education could not charge him as he was an employee of the SDC and was not on Government payroll.

“Let’s remove the school and how it is run but look at the individual. He is old enough to know that he was not supposed to take advantage of a minor. If he is found and convicted, then he is a criminal and belongs in prison,” he said. The SDC chairman, Mr Brian Phiri, said he was yet to be furnished with more details on the matter . . . and could not give facts. The Sunday News