Flamboyant Prophet Passion Java spent the greater part of the day causing havoc in Harare’s CBD and the University of Zimbabwe as people stampeded to get a glimpse of him.

The outspoken prophet was either live on his social media handles or uploaded videos of some of these moments as people stampeded to get close to him.

His first stop was Doves funeral parlour where a crowd gathered around his car reducing it’s speed to almost zero. 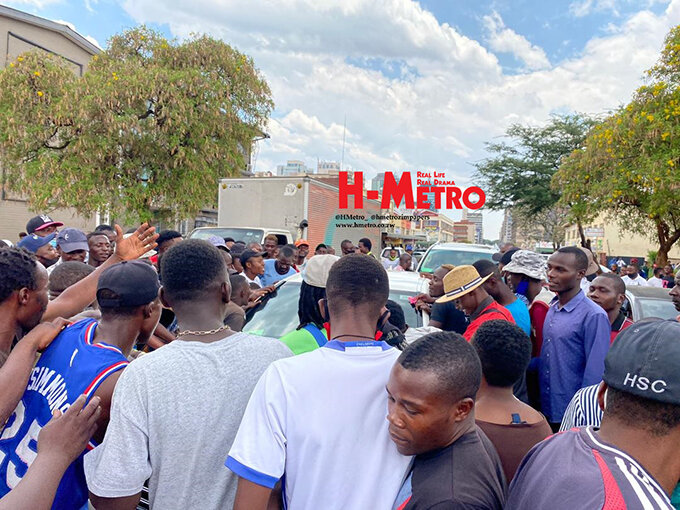 Passion responded by throwing wads of US dollars causing an even hyper frenzy as people jostled to catch the cash.

He then went to the University of Zimbabwe.

H-Metro caught up with him again at Zimpost in the CBD where he was mobbed by hundreds of people.

His actions posed a danger to the people, as they did not wear face masks nor observe social distancing risking Covid-19 infection.

Prophet passion caused another stir when he got into a local supermarket for some shopping.

Joined by musicians Mudiwa Hood and Roki, and his sidekicks Boss Lashan, Prophet Israel, Bishop Josh and bodyguards, Passion was spoilt for choice on who to send to do his shopping without causing a stir but he still chose to walk out himself.

His argument was that he has done that before but without any attention from crowds.

From the supermarket, Prophet Passion went to a popular clothing shop where he had a meeting with the owner Cynthia Bizure.

His bodyguards needed to be on full alert to keep people off him as he made his way from one Jan Jam shop to the other. H-Metro

Alois Bunjira pays tribute to Passion Java’s mother.. she helped me and Shutto