Self-exiled former cabinet ministers and G40 kingpins Professor Jonathan Moyo and Saviour Kasukuwere were embroiled in a heated argument concerning constitutionalism being restored back in the ruling ZANU PF party which is believed to be besieged by the military. 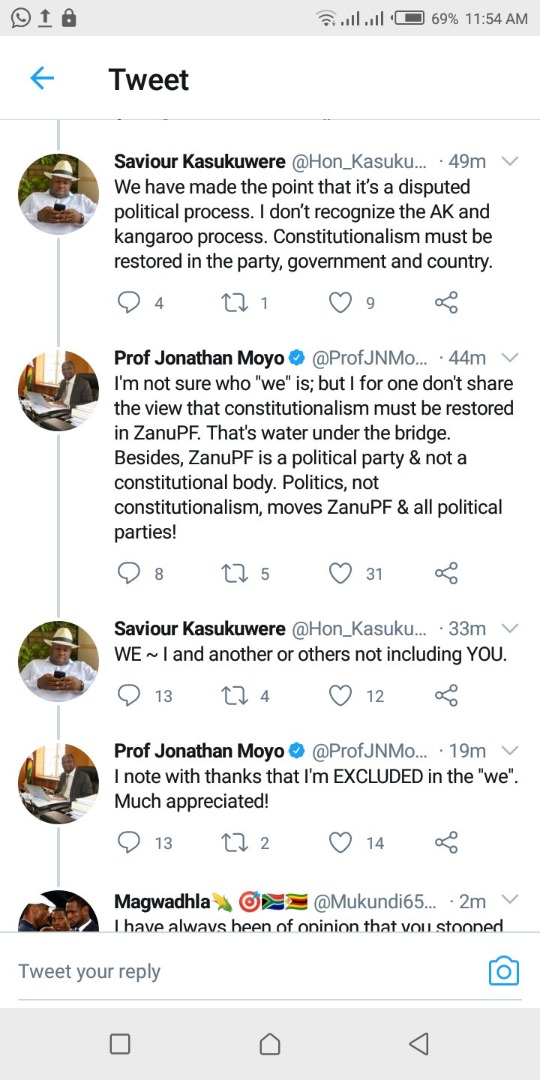 The heated argument on Twitter began when Kasukuwere was criticizing his expulsion from ZANU PF as unconstitutional and undemocratic, saying;

“We have made the point that it’s a disputed political process. I don’t recognize the AK and kangaroo process. Constitutionalism must be restored in the party, government and country.’

Moyo was not amused by Kasukuwere’s remarks which was suggestive that he spoke on behalf of all exiled former G40 politicians including him and responded saying: “I’m not sure who “we” is; but I for one don’t share the view that constitutionalism must be restored in Zanu PF.

Tyson as Kasukuwere is affectionately known in the political circles, clapbacked at Moyo’s comment and said: “We ~ I and another or others not including you.”

A comment which highlighted some ideological divisions and a possible fallout between the two.

Moyo however, sarcastically responded: “I note with thanks that I’m excluded in the “we”. Much appreciated!”

“In my humble opinion, you’re tying yourself in knots. Mnangagwa and his lot are murderers. Would you demand or want due process from murderers? The law must apply to political parties, but it’s important to understand that they’re unique entities, which are essentially political,” wrote Moyo.

Kasukwere aggressively responded: “The challenge will be from the roots to the branches!” a comment suggestive the exiled politician harboured ambitions to return to ZANU PF.

Addressing journalists after a recent ZANU PF politburo meeting party spokesperson, Simon Khaya Moyo said President Emmerson Mnangagwa challenged the politburo leadership to be more visible at the grassroots and that there were consequences for being caught hobnobbing with G40 elements he regarded as a threat to the nation. Nehanda Radio

Tsenengamu will spend another night in custody after bail ruling postponed