While Zimbabwe’s opponents in next month’s African Cup of  Nations qualifier, Algeria, were beating the Super Eagles of Nigeria in a high-profile friendly in Austria on Friday night, there was still some panic and uncertainty in Harare amid the chaos over the Warriors’ trip to Malawi. 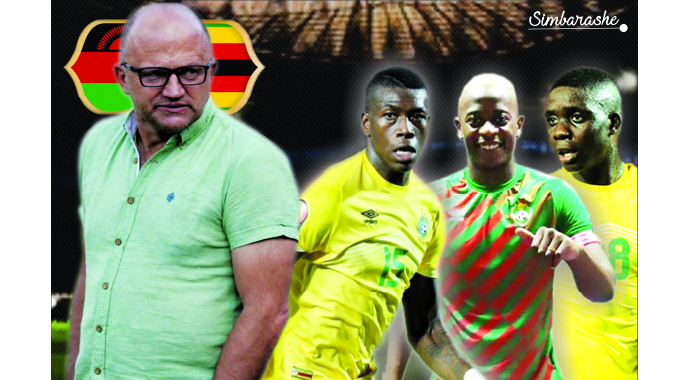 The Warriors play the Flames in Malawi in an international friendly at Kamuzu Stadium in Blantyre this afternoon, following a chaotic week that almost saw the game being cancelled due to a cocktail of factors.

They eventually left aboard a chartered flight yesterday afternoon.

Coach Zdravko “Loga” Logarusic, who only flew back into the country on Monday, had initially targeted to use 17 foreign-based players, but ended up resorting to local players who have been inactive for almost 10 months after a number of Europe-based stars failed to turn up.

Thirteen of the 17 players Logarusic had wanted for the match, including skipper Knowledge Musona and Lyon star Tino Kadewere, were not released by their clubs for varying reasons.

United States-based goalkeeper Tatenda Mkuruva, who was due to mark his comeback after a three-year hiatus, national Under-23 first choice goal minders Martin Mapisa, Kundai Benyu, Macauley Bonne, Tendai Darikwa and unheralded Tendai Jirira were also initially shortlisted, but did not turn up.

There was a no-show from the England-based duo of Jordan Zemura and Adam Chicksen, star midfielder Marshal Munetsi who plays in France, Azam FC hotshot striker Prince Dube and Victor Kamhuka.

The ageing big defender, who failed to make the grade at some local sides including Dynamos, now plies his trade in little-known Myanmar.

The players were initially set for a 600km road trip to Blantyre until ZIFA ditched the idea and announced late on Friday that they had secured a chartered plane, which cost them about US$50 000.

This came after a public outcry over the road trip from various stakeholders including the Sport and Recreation Commission, who directed that ZIFA either cancel the friendly or fly to Malawi using some of the financial resources they received from FIFA as part of Covid-19 relief fund for the resumption of football.

Loga managed to arrange at least two training sessions at the ZIFA Village before the team’s departure.

But it is the decision to resort to unfit local players, which highlighted ZIFA’s poor planning and literally reduced this afternoon’s encounter to a money game.

The move also received widespread condemnation with the Footballers Union of Zimbabwe leading the way.

“Most of the challenges were Covid-19-related. It was even difficult to organise air transport because there are no commercial flights out of Zimbabwe at the moment because of the coronavirus restrictions in place.

We also failed to secure some of the players we had targeted for this match because clubs are not obliged by FIFA to release players due to the current travel restrictions wrought by the coronavirus.

But we are glad everything is now in order. The ZIFA executive made frantic efforts to secure a charter plane to Malawi,” said Gwesela.

However, FUZ, through their president Desmond Maringwa, had advocated for the cancellation of the game.

“We have noted with great concern that ZIFA have made arrangements for the team to travel by bus or air for a distance which is 600km one way. As FUZ we wish to make an appeal to the authorities to cancel this game for the good of our players and find another solution which does not leave our members susceptible to health problems.

“Let’s not continue normalising abnormal situations and setting wrong precedence due to lack of planning.

“The health and safety of players is not negotiable. According to the return to play protocols, in normal football settings players need a full pre-season training programme which is about six to eight weeks, and for those whose leagues have resumed at least three weeks of high-intensity group training is required before resuming play so that players retain optimally football-specific endurance, speed, strength, and co-ordination,” Maringwa said.

Dube said the manner in which the preparations had been done was a shocker to them.

“Ordinarily during a normal pre-season after a break of plus or minus two months at the end of a season, teams need six to eight weeks to get players into competitive condition. The team coaches and medical staff insist on this and their reasoning is based on a scientific approach to the game.

“We know that the lack of adequate preparation leads to injuries and reduced performance. I am not sure how now, with players having been living their lives like ordinary ‘civilians’, can be ignored and players head straight into a competitive encounter.

I suppose we all keep learning new things every day?’’ said Dube.

Mutukwa said clubs needed to take a bold stance to stop practices that not only brought the game into disrepute, but left players at risk.

“In fact, their clubs should have refused to release the players, the chartered plane was a result of pressure, the Government had refused to clear them at the border since our borders are still closed.

They should have simply cancelled the trip since the local players were inactive. What criteria did they use to select the players . . . pure favouritism manifesting. So everyone knows that this is what they always do,’’ Mutukwa said.

Dhlakama also said the attempt to use local players after a lengthy lay-off defied scientific logic. “Sports medicine experts recommend training and conditioning as a way to prevent injuries from happening in the first place.

Everyone has different strengths and weaknesses, and some of them are things you might not be aware of or expect.

“A good coach can evaluate a player and give them workouts and conditioning exercises that are targeted to their individual needs. These help you build up the weaker areas of their body so there’s less risk of overall injury.

“There are also principles of training which we must adhere to in order not to compromise the health of the players. In this situation the principle of reversibility has to be respected, if you don’t train for a long time then the player reverses all that he benefited from the training.

“The players were also supposed to be screened in terms of fitness tests to see if they have a fitness threshold that would carry them throughout the duration of the game. So when we train, we build a fitness base and deposit a certain amount of energy, which we will then withdraw when playing a game or something like that,’’ said Dhlakama.

Faced with the criticism, Loga made another U-Turn and dropped the quartet of Ngala, Amini, Bhamusi and Wadi as he turned to more of the Zambian contingent with the trio of Evans Katema, Tafadzwa Rusike and Dennis Dauda flying in just in time to link up with the rest of the squad.

Mudimu is expected to fly straight to Malawi. As it stands, Loga will today use most of the players who will not be part of the massive Nations Cup showdown with Group H leaders and African champions Algeria next month.

The 54-year-old Croat, however, sees the situation as an opportunity for the nation to start preparing for next year’s CHAN finals.

“We know they are not fit, but some have been doing individual training, so we need to see this as an opportunity to start preparing for CHAN,” said Loga.

Siblings team up to murder mother