Some residents of Cowdray Park suburb in Bulawayo are counting huge losses after their homes including household property among other valuables were on Tuesday night extensively destroyed by rains which were preceded by violent thunderstorms and strong winds. 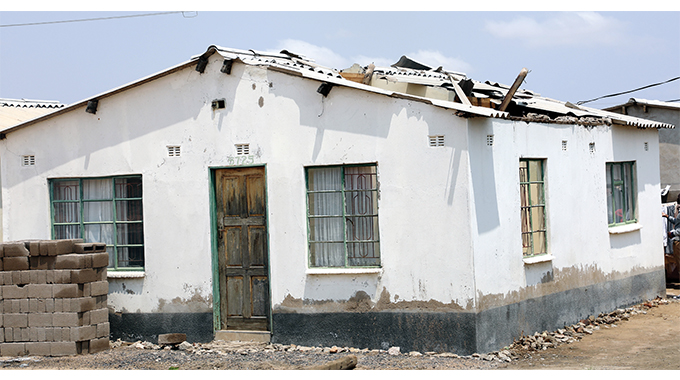 On Tuesday, Bulawayo recorded its first rains, which were accompanied by strong winds. The storm plunged some residential areas and parts of the city centre into darkness.

Chronicle yesterday visited the affected families in Cowdray Park and the victims gave harrowing experiences of how they scurried for cover as their roofs were being blown off by the strong winds. At least 15 properties in the suburb were destroyed.

Ms Melissa Moyo said fear engulfed her as the incident unfolded shortly after 9PM. The roof of her house was completely blown away.

When a Chronicle news crew arrived at her house, the family was clearing the debris of asbestos roofing sheets and removing electrical appliances, soaked mattresses and blankets from one of the rooms. Water was flowing through the house and neighbours were assisting in mopping the floors.

“I was actually having supper at around 9PM soon after knocking off from work when it started raining. There was a strong wind and immediately I heard a deafening sound as the roofing sheets snapped into pieces and huge chunks flew off. Some of the roofing rained into the house. I closed my eyes out of fear,” said Ms Moyo.

“I was so terrified and confused upon opening my eyes as there was dust all over the house. I managed to gather enough courage and moved a few items, which included a television set and radio into one of the rooms not affected and then alerted my neighbours.”

Ms Moyo said she watched helplessly from outside as the entire roof was being blown away. Neighbours helped her remove some of the household property, which had already been soaked in water.

“We had to quickly remove the furniture which was in the affected rooms. Some of the property was heavily soaked by water while some of the electric gadgets were also damaged. It’s a relief that I was not injured as I managed to escape,” she said. “The rains lasted about 15 minutes but they caused severe damage and I am still in a state of shock. I don’t even know how I will raise money to replace the damaged property.”

Her neighbour, Ms Bessie Ncube said she was startled when she heard the deafening sound of thunder and lightning.

She said she was phoned by one of her neighbours alerting her of the destruction of property at a house left under her care by a relative who is based in South Africa.

“I waited for the rain to stop before I went to my relative’s house and discovered that part of the roof had been blown off. Upon arrival, there were fragments of roofing sheets scattered all over the floors in the affected rooms,” said Ms Ncube.

“When we went to clear the rooms this morning that is when we discovered that a room divider, 54cm plasma television set and radio were completely damaged.”

Chronicle observed that the wall dividing the bedroom and lounge also collapsed and there was rubble all over the floor.

Ms Ncube said no one lives in the house as the owner is based in South Africa.

Another victim, Miss Ayanda Moyo said luckily, she and her two younger sisters were in the kitchen washing dishes when they heard the sound of the roof collapsing in the lounge. The window panes were also shattered.

“We were quite fortunate because we had just left the lounge. We were washing dishes in the kitchen when the roof was blown off. It was so scary. When we heard the thunderstorm, I went to check and there were pieces of the roofing sheets strewn all over. Water was already flowing inside. We managed to push some furniture into one corner,” she said.

Her aunt, Mrs Enia Sithole of Tshabalala told Chronicle that she had to rush to Cowdray Park to offer trauma counselling to her three nieces whose parents are in South Africa.

“My niece called me last night and she was crying. She informed me of what had befallen them and that is why I abruptly rushed here. They are so traumatised and I understood their predicament given that under such circumstances as children they need an adult, which is why I am here,” she said.

Ms Attalia Moyo said she initially thought it was an earthquake when she heard an explosive sound while watching television.

“When I went outside soon after the rain had stopped, I discovered that the wall of my neighbour’s house currently under construction had crumbled. My precast wall also cracked as a result of the strong winds and thunderstorm,” she said.

Mr Eddwell Ncube said part of the precast wall was destroyed by the strong winds resulting in his two vicious dogs, a German Shepherd and a cross-breed of a bulldog and German Shepherd bolting out of the yard.

Mr Lovemore Moyo said: “The rain was accompanied by strong winds which hit the area. The winds blew away the roof of my sitting room and main bedroom. We were shocked as everything was sudden. Luckily no one was injured as my family sought refuge in one of the rooms which was not affected.”

Mr Sibonginkosi Sibanda said when the wind blew off trusses and roofing sheets at his neighbour’s house, some fragments shattered window panes at his house.

“I visited 15 homes of the residents who were affected by the thunderstorm and it was quite a sad scenario. You have a situation where some rooftops were completely blown away. I have since approached the donor community and some have offered to chip in with funds to assist the affected families,” he said. The Chronicle