The event marked a return to ‘UFC Fight Island’ and Adesanya made a second successful defence of his crown by finishing the previously undefeated Brazilian via a second-round TKO.

Yas Island has been transformed into an isolation bubble for fighters, teams and media for a five-event run, and the first showing of the promotion’s second stint also saw the new champion crowned in the co-main event as Poland’s Jan Blachowicz won the vacant light heavyweight title.

From Chivhu to the Octagon

In the main event, Adesanya, 31, focused much of his attack on Costa’s lead leg in the first round, connecting with 15 leg kicks inside the opening five minutes, while the Brazilian was more patient than some expected.

However, the fighters continuously exchanged comments as they attempted to goad each other into an early mistake.

Adesanya’s leg attack continued through round two as the Nigerian-born New Zealander masterfully controlled the range and picked off Costa, 29, almost at will, with the Brazilian struggling to land anything of substance.

Then, as an increasingly frustrated Costa looked to close the distance, Adesanya struck and dropped the hulking Brazilian with a counter-right, then finished his man with ground strikes after three minutes, 59 seconds.

Meanwhile, the man himself said he proved his naysayers wrong after receiving criticism from some quarters following his lacklustre display against Cuba’s Yoel Romero in his previous appearance at UFC 248 in March.

“You all must have forgotten. I have to make you remember, we’re the best,” said Adesanya, referring to the criticism he received from some quarters following his lacklustre display against Cuba’s Yoel Romero in his previous appearance in March.

He then stated he would like to face Jared Cannonier in his next title defence if the American can defeat former champion Robert Whittaker in their fight at UFC 254 on 24 October.

“Anderson Silva has lived a great legacy and I want to do service to the middleweight division,” he said. “Jared Cannonier: I love his energy, he’s a beautiful man. I said, ‘You destroy Robert Whittaker, you’re next.'” 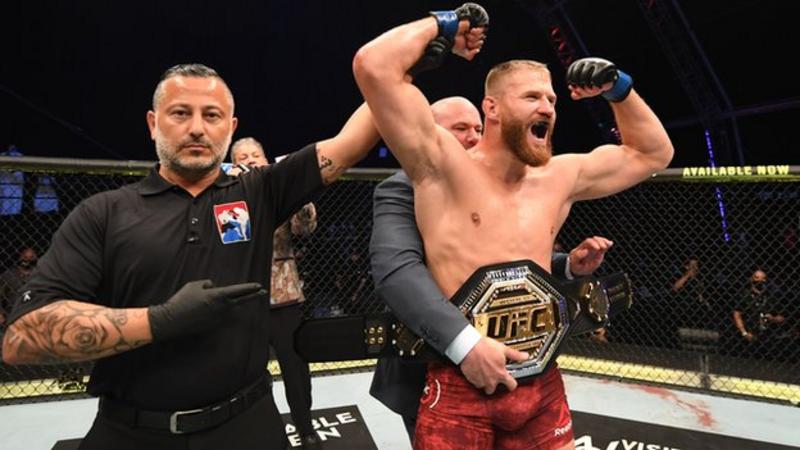 In the night’s co-main event, Blachowicz captured the UFC light heavyweight title – vacated by long-reigning champion Jon Jones, who has moved up to heavyweight – with a punch-perfect performance to finish Dominick Reyes in the second round.

Blachowicz, 37, settled quickly and connected more frequently throughout the opening round, including a pair of heavy kicks to the body that left a large red welt on the right side of the American’s ribcage.

The controlled aggression continued as Blachowicz loaded up and started to put together more combinations. The former KSW light heavyweight champion broke Reyes’ nose when he connected with his right hand and poured on the pressure to finish his man with 24 seconds remaining in the second round.

Blachowicz’s TKO victory saw him improve his career record to 27 wins and eight losses. That extends his winning streak to four, with three of those victories coming within distance as a result of what he calls his “legendary Polish power.”

After his victory, Blachowicz said: “Jon Jones, where are you? Don’t be a quitter. I am waiting for you.”

But with Jones’ time as a 205lb fighter now seemingly in the past after his move up to heavyweight, Blachowicz will face the challenge of fending off a growing list of light heavyweight contenders, including rising European talents Jiri Prochazka and Aleksandar Rakic, plus Brazilian veteran Glover Teixeira and the last man to defeat him, Brazil’s Thiago Santos. BBC News

From Chivhu to the Octagon

‘Next McGregor’ Adesanya wants to be UFC’s G.O.A.T