One of the two church structures belonging to the Seventh Day Adventist was among the demolished illegal structures in Cold Comfort yesterday. 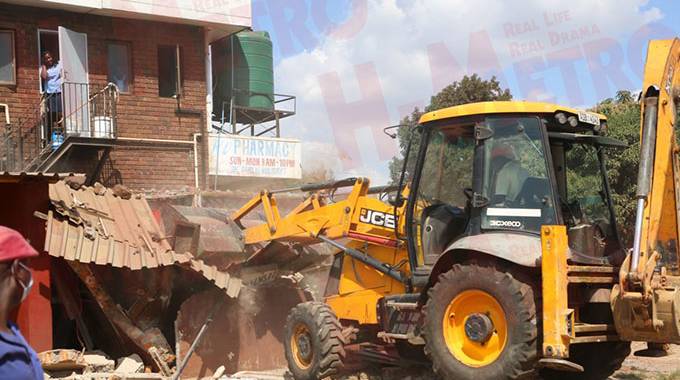 City Council demolished the structure on the ground that it was erected away from where they have applied for.

Team leaders, who were on the ground, debated about it before demolishing the place of worship saying the Seventh Day Adventist exceeded from the boundary of their legal stand.

Residents had no kind words over the church demolition and the grinding mill close to the place.

“We heard that Mayor of Harare ordered the team to spare places of worship following the demolition of Prophet Freddy’s church but these guys are too carnal to respect God and people’s spiritual and material food,” one of the residents was heard saying as watched the bulldozer destroying the church structure.

The City of Harare team did not entertain residents for leaving some of the illegal structures describing them as corrupt.

Residents also expressed their displeasure by celebrating the mechanical fault that developed on one of the bulldozers after it demolished a cabin where an older man was awakened from sleep.

“Yea our God answers with fire that is why your bulldozer stopped to work,” one of the residents was heard shouting on top of his voice.

“How can you awaken such an old man from sleeping in order to destroy his cabin which is at a house under construction, that is being more zealous and lawlessness.

“From destroying our place of worship, you destroyed our grinding mill, our tuckshop but sparing Mai Daka’s salon because you know each other!

“If City of Harare is demolishing illegal structures according to law, they must not leave any of such in every suburb.

“Corruption will never end if not nipped from the bud,” said the resident.

Meanwhile, demolishers could not continue following the mechanical fault of one of their bulldozers.

The team had to drive to Kuwadzana and passed through Sekuru Mambojena warning residents to remove their illegal structures since they are expected to resume demolitions in the suburb today.