A married woman’s alleged illicit affair with her brother-in-law was exposed after she clashed with her workmate for bedding the same person on Saturday. 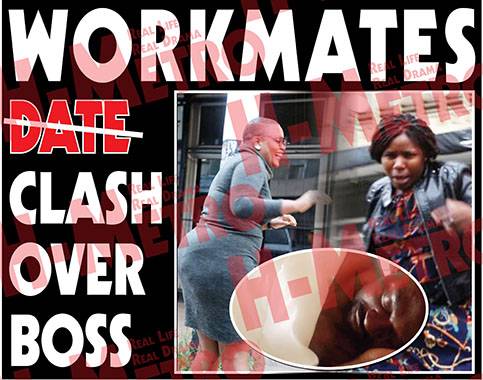 Rudo Makoni clashed with her workmate only identified as Lucy after the former discovered that they were both bedding their boss Joseph Toendepi who is husband to Rudo’s sister based in the United Kingdom.

Makoni reportedly bought a new cellphone for Lucy after she learnt of her shenanigans with Toendepi and the latter approached their boss informing him about the secret she kept and the two fell in love as well.

When H-Metro visited the two at their boutique located at Karigamombe Building, tempers flared as the two exchanged harsh words accusing each other of lose morals.

Lucy confirmed bedding Toendepi while showing this publication a photograph of him resting on her bed.

She said it was that photograph of Toendepi resting in her bedroom that affected Makoni.

“This is Toendepi’s photograph sleeping on my bed in my room and that is the cause of my differences with Makoni.

“Makoni bought a new phone for me after I discovered that she was bedding her sister’s husband and I kept the secret.

“On our boss’ return to the country, I approached him over the issue and we ended up in an affair where we had quality time at my house.

“Makoni discovered that I was in love with boss and felt jealous but she is married,” said Lucy.

Makoni forced Lucy to return the phone she bought for her in the presence of H-Metro and told this publication that the phone was just a present to Lucy and she was withdrawing it since they had some differences.

She denied bedding Toendepi saying her confession about her affair with the boss to Lucy was a joke.

“It is true that I confessed to her that I was bedding my sister’s husband but it was a joke I was sharing with her,” said Makoni.

Makoni was subsequently arrested for snatching H-Metro’s news gathering equipment and is expected to appear in court tomorrow.

Toendepi denied bedding Makoni and could not confirm nor deny bedding Lucy after H-Metro sent him a photograph claimed to be of him resting on Lucy’s bed.

“Allegations that I bedded Makoni are false and unfounded,” said Toendepi.

“As for Lucy I am aware of alleged schemes to plant prostitutes in service to generate news and some work is underway to establish historic connections between H-Metro with the said subject,” said Toendepi. H-Metro