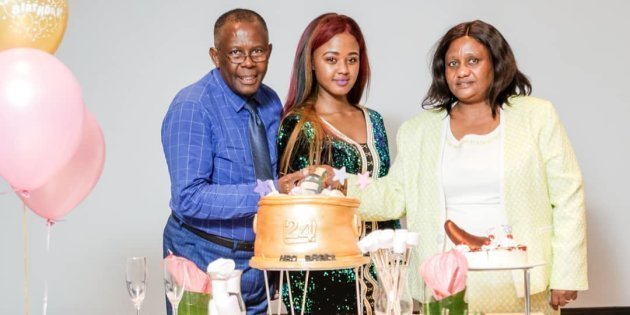 Babes Wodumo’s father, Bishop Welcome Simelane, is back in the media and to nobody’s surprise, he is speaking very critically of his daughter’s relationship with Mampintsha.

In fact, uBaba Simelane has gone as far as claiming that his daughter is under Mampintsha’s spell!

This is South Africa, and koMzansi things like witchcraft and spells are not beyond the realms of possibility.

Folks from KZN are no strangers to hearing stories of their loved ones falling under spells, being cursed or otherwise possessed by their enemies.

And believe it or not, sometimes it’s their lovers who are alleged to be behind the dark magic!

Babes Wodumo: I made blunders but I’m still Gqom Queen

That’s exactly what Welcome Simelane believes and in a desperate bid to save his daughter, Bongekile “Babes Wodumo” Simelane, he has pleaded with church-goers across South Africa to please pray for his daughter.

Welcome spoke to Daily Sun where he revealed his suspicions that Babes is under a spell when he said, “Sometimes she does strange things. She behaves like a possessed person.

It’s like she’s out of her mind. She’s tried to leave Mampintsha many times, but he lures her back. I’m hurting because he won’t let her go.”

He believes that Mampintsha has tapped into dark forces to keep Babes from walking away and he is seriously concerned. In fact, this isn’t the first time that Daddy Wodumo has suggested this:

Now, the saddened father claims that his daughter no longer updates him about their relationship.

“It’s unhealthy and I don’t like it. Their relationship is on and off. I don’t know what’s happening between them. They no longer update me, but as a father I can see things aren’t okay. I’ll have to wait and see.”

Babes Wodumo and Mampintsha’s relationship has made headlines on a number of occasions in the past year. Not least of all when their abuse saga reached a boiling point after Babes shared a live broadcast showing Mampintsha hitting her last year.

2020 began on an equally controversial note. Their new docu-series, Impilo, was meant to air on Moja Love but was cancelled at the final hour.

It’s last resort territory and Welcome Simelane is hoping that God can save his daughter. “I’m appealing to South Africans, all churches and church leaders to pray for Babes.”

Do you think that Babes can be freed from Mampintsha’s grasp? Zalebs

Babes Wodumo: I made blunders but I’m still Gqom Queen