Daisy, widow to the late music icon and national hero Oliver “Tuku” Mtukudzi, says it’s not her duty to “bail out” the poor. 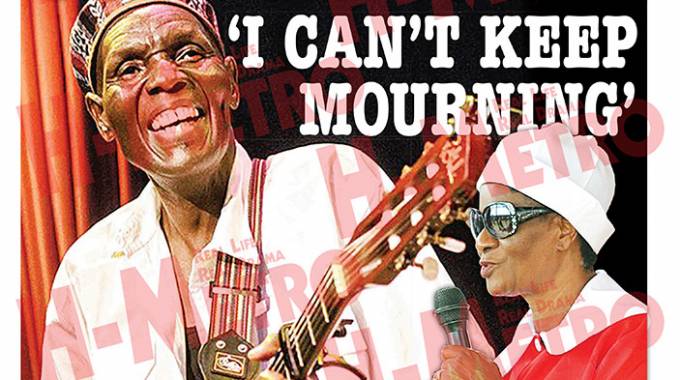 She says she will not pay attention to those calling her an ‘evil’ and ‘heartless’ woman.

As we mark exactly a year without Tuku today, Daisy says she will not respond to media reports portraying her as a cruel mother.

If she were to help anyone – says Daisy – her advice would be very simple: work hard and mind your business.

These are some of the key issues she boldly believes in ahead of Tuku’s first anniversary.

A year after Tuku’s death, a lot has happened which might prompt him to turn into his grave.

There are however some developments which would also make Tuku smile and even regret the mistakes he made in life.

And exactly 12 months after his death, there has been a lot in the press making headlines ranging from the estate wrangles, family feuds and of course the battle to preserve the Tuku legacy.

Being the surviving spouse to the departed crooner, Daisy said she was not in a hurry to fulfil some of the projects they started together with the late icon.

NEW MUSIC
As expected by many a fan, Daisy said there is plenty of unreleased stuff left by Tuku in his archives.

“Tuku has a lot of unreleased stuff that we are definitely going to release with time but we are not in hurry to release it.

“I will continue operating the way we used to do with Oliver, aiwanzoti kumhanya handiko kusvika.

She also hinted on a new album due for release as part of the commemorations.

“The new album which is ready for release is called Abi Yangu 2.

“It carries eight tracks, it was recorded in Norton and it will be released soon.

“There are so many projects that we are going to continue working on that we used to organise with Tuku,” she says.

HOLIDAYING
Asked what she missed most after Tuku’s death, Daisy was blunt:

“It’s hard staying alone without Tuku but I have to accept it. We used to go on holiday during this time of the year when most artistes will be on break.

“The last time we flew out on holiday we went to Canada and Kenya just to refresh with my husband.

“As you know, his job was so demanding that I would advise him that we needed to go on holiday to relax and forget our problems,” she says.

LIFE AS A WIDOW
Daisy, who was heart-broken when she lost her husband, says she has learnt to accept the reality.

“As a widow, I have learnt that I cannot keep on mourning because hapana paachafa akamuka Oliver.

“When I miss him most, I just drive to Madziwa where he was buried to see his grave and return to work for survival.

“I can’t keep crying every day because Tuku played his part and we are all expected to play our part,” she says.

UNITY
Daisy, who is reportedly not seeing eye to eye with some of Tuku’s daughters especially Selmor, says she has had enough of the issue.

“There is nothing I can say about the issue because whatever I say it will be misinterpreted.

“If Selmor or whoever you want to bring to the fore has said something against me, I won’t say anything.

“I know I have never wronged anyone and God is my witness.

“If I have done something wrong, only time will tell who is wrong and right.

UNDISCLOSED SECRETES
Daisy says there are some secrets that she would not disclose as the information is meant for herself.

“I have heard so many stories flying out of people trying to bring me down but I won’t give in.

“Now that I sometimes get ill, I have realised that it’s wise for me to mind my business rather than concentrating on what people say.”

HELP
As many people who wanted help looked up to Tuku as the father figure, Daisy says she has her own modus operandi that people should embrace.

“I’m not mandated to help all the poor but I can only assist where I can.

“My advice to those who might want to come to me asking for help is very simple: work hard and mind your business.

“Where is it written that I must help people who are in need all the time?

“I’m also widowed with my own problems that need to be attended to.”

PAKARE PAYE/CONTINUITY
With many fearing that Pakare Paye Arts Centre in Norton might become a white elephant if not professionally run, Daisy remains defiant.

“It’s still business as usual at Pakare Paye and we are simply doing what we used to do when Oliver was still alive.

“Most of the artistes who passed through Pakare Paye are still frequenting the arts hub for instance Munya Mataruse and Mbeu were recently there at the centre.

“New-comers are still welcome as they are getting mentorship.

“We have special people that used to mentor these people other than Tuku and there is continuity.

“As for the festivals which had become a permanent feature on our arts calendar, we will continue holding them as long as we live.

“I will not let down Tuku as he has always wanted us to really work hard and keep his legacy going.”

As we mark 12 months without Tuku, this is what Daisy has in mind and she insists she doesn’t owe anyone an apology.

Daisy says she deserves to be ‘freed’ to live her own life while those she claims to be haters will continue working towards her downfall day and night.