Another car was yesterday crushed by an ageing tree around the Avenues area barely three weeks after similar incidents left a trail of destruction after a downpour. 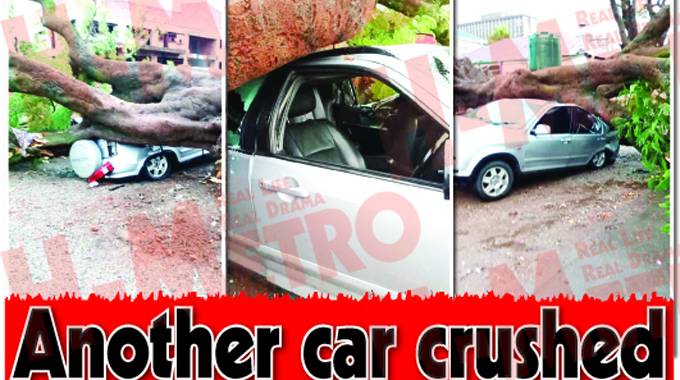 It rained for at least 10 hours between Sunday evening and yesterday morning, which then resulted in ageing trees collapsing.

A tree fell on a Honda CRV parked along Sixth Street with residents blaming it on the City council’s failure to maintain aged trees in its area of jurisdiction.

When H-Metro arrived at the scene, the owner of the vehicle had removed his registration plates.

“He felt shy and quickly removed number plates from his car over parking it under the tree when calls are being made warning motorist over the falling trees,” one of the witnesses said.

“Most of the trees in the capital were planted during colonial times and the council has failed to maintain some of them; they must replace the aged ones with the new plants,” he said.

“Once they are identified, we will then cut down the old trees.

“We are doing this project with the communities.

“During this process we will also be planting indigenous trees to replace the exotic ones.

“We are also hard pruning the old trees so that the canopies have less weight on the tree and this will reduce the risk of trees falling,” he said.

Police last night said they had not received a report on the incident.

“We have not yet received a report of a tree falling onto a car,” said police National Spokesperson Assistant Commissioner Paul Nyati. H-Metro