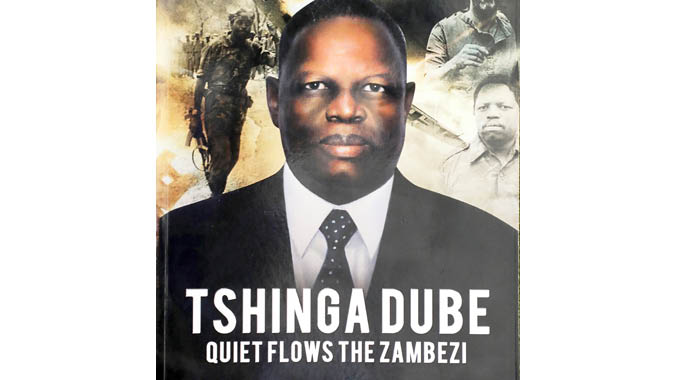 Veteran freedom fighter and former Cabinet Minister Retired Colonel Tshinga Judge Dube has penned his autobiography which is set to be launched at the National Art Gallery in Bulawayo on Friday.

In his autobiography titled: Quiet Flows The Zambezi, Rtd Col Dube tells his story in a riveting way, documenting his early life, taking the reader through his participation in the armed struggle up to the time of the ceasefire.

Rtd Col Dube then reveals in the book untold stories about tensions that characterised the Zimbabwe National Army (ZNA) in its formative years because of great suspicions between the Zipra, Zanla and Rhodesian Army forces.

He takes the reader through the Gukurahundi period, tells the story of how he set up a trap that resulted in the apprehension of mercenary leader, Simon Mann, who with other mercenaries were en route to Equatorial Guinea where they were going to stage a military coup against President Teodoro Obiang Nguema Mbasogo in 2004.

The riveting account ends with the historical political events in Zimbabwe where Rtd Col Dube gives an insight into the ushering of the New Dispensation through Operation Restore Legacy in November 2017 when President Mnangagwa took over from President Mugabe.

The autobiography edited by Fikile Nyathi was published by Amagugu Publishers.

The book’s cover sums up what is contained inside as there are two pictures of Rtd Col Dube one in a suit and the other in military camouflage during his days in the armed struggle. There is also the picture of Mann in prison garb while the other picture is that of late Zipra commander Rogers Alfred Nikita Mangena.

Rtd Col Dube said the book is an autobiography of a former Zipra cadre.

“Basically the book is a story of a former Zipra cadre who like most of the boys grew up in a village in Matopo.

He began to taste the cruelty of colonial regime when they were flushed out of their land to a desolate area far away.

He proceeded to study in a missionary school and was influenced to the nationalist movement. He later joined and trained as a guerilla fighter and met all the hazards that go with the war.”

Rtd Col Dube was born on 3 July 1941 at Fort Usher in Matobo District, Matabeleland South. He holds an MSc Degree in Electrotech from MADI Institute of Engineering in Moscow, Russia.

An expert in military communications, Rtd Col Dube also holds a Higher Diploma in Chemical Weapons Convention in the Hague and has chaired the Zimbabwe National Authority of OPCW for 15 years.

A long-time chief executive of the Zimbabwe Defence Industries for 22 years, Rtd Col Dube served on many parastatal boards. On the political field he was the Member of Parliament for Makokoba in the last parliament and also served as Minister of War Veterans in the Old Dispensation. SundayNews

One dead, several injured as grenade explodes in house