CAPS United trio of Ronald Chitiyo, Dominic Chungwa and John Zhuwawu and an unnamed kit manager are due to appear before the Bulawayo Magistrates Court on 18 November after they allegedly assaulted a Premier Soccer League security officer and Chicken Inn officials. 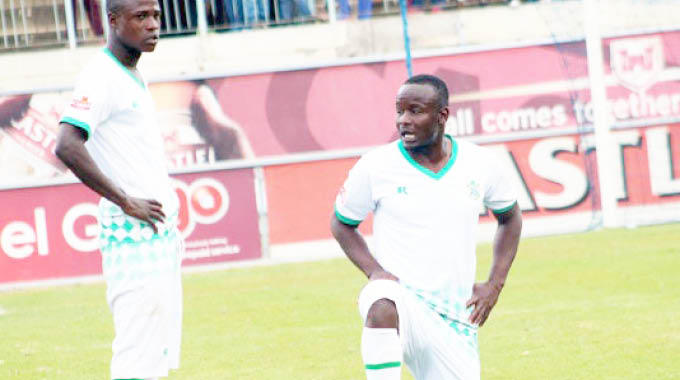 Ronald Chitiyo and Dominic Chungwa (kneeling)The ugly incident that spoiled the world’s most beautiful game happened on 23 October at Barbourfields Stadium after the top of the table clash between Gamecocks and Makepekepe.

The quartet was reportedly at the centre of an embarrassing dressing room brawl with PSL bouncers and Chicken Inn officials after they failed to stomach their ONE PIECER (1-0) defeat at the hands of Gamecocks.

While this publication got no joy in getting a police confirmation, we have it on good authority that the assault case was reported at Barbourfields Police Station with the reference number being RRB Ref 3730392.

In a related matter, the three players, together with their other teammate Carlos Rusere, were on Wednesday due to appear before a Premier Soccer League Disciplinary Committee following allegations of assaulting referee Happy Mabhena as well as Chicken Inn officials, Tapiwanashe Marime and Shephered Mpofu on the same day in question.

If found guilty by the PSL, they could face long bans and miss out on the team’s title run in which four matches are left before the end of the season.

The four players were charged for violating order 31.1.2.9 of the PSL rules and regulations which state that it is an offence on the part of the player who: “Assaults, threatens, intimidates, coerces, interferes, misleads or insults a match official, player, official of the league, public, press or media, or any other person, before, during or after the match.”

Ngezi Platinum Stars lost the game and Chakoroma was subsequently banned for three matches and missed out on a chance to be selected among the Castle Lager Soccer Stars of the Year.
He was also made to pay a fine. B-Metro