Pupils at Prince Edward are living in fear of bullying from seniors at the school after a video of a senior pupil beating a junior before a fight broke out leaked. 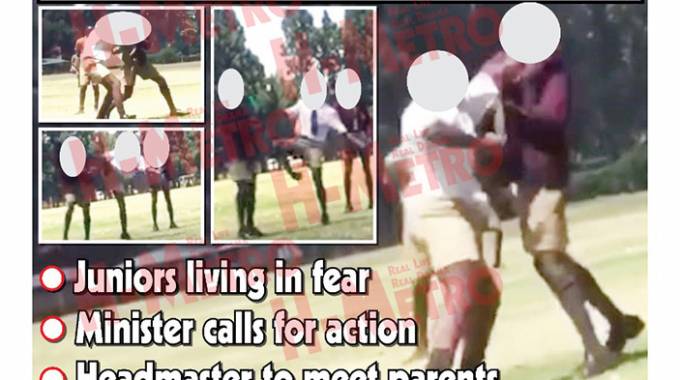 The pupil being bullied in the video fights back with other pupils and social media users calling for action to be taken.

In the circulating video clips, a form four pupil in a white shirt is seen kicking a form three pupil in the face while other pupils watched with some recording the action.

The other pupil eventually fights back in a nasty exchange.

H-Metro spoke to a pupil who said he was at the scene when the fighting was taking place on the school grounds.

“What actually happened is that the form four boy in a white shirt got furious after his younger brother was beaten up and he confronted the junior leading to the fight.

“The fight went on and we could not get them apart as they equally exchanged serious blows but bullying is real here,” he said.

The Minister of Primary and Secondary Education Cain Mathema implored schools to set up anti bullying campaigns and mechanism.

“No to bullying in schools, nobody in Zimbabwe should be bullied whatsoever.

“Teachers and school heads must set an example making sure that this does not go unpunished.

“No one can live alone, we appeal to communities, schools and everyone involved so we can fight this behaviour,” he said.

The school headmaster Dr Aggrippa Sora confirmed the incident saying he will be meeting with the parents of the pupils today.

“This incident is sadly an act of settling scores and a form four student knowing that he is about to finish his education at the school decides to leave a bad mark thinking that he will be untouchable.

“The school does not condone such behaviour, no boy should touch another boy and disciplinary hearing is in progress.

“We are going to give strong recommendations to the Ministry and send a strong message to the kids that such behaviour cannot be tolerated.

“We assure all stakeholders that swift action is going to be taken and the situation is under control as we will try to have anti-bullying campaigns in the school,” said Dr Sora. H-Metro

From goalkeeper to top striker..The rise and rise of Stewart ‘Shutto’ Murisa