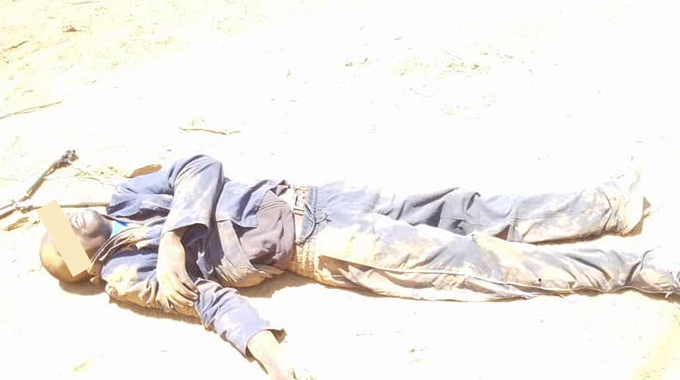 The bodies of the two were taken to the United Bulawayo Hospitals (UBH) for post mortem.

She said the first body was discovered around 7AM and the second around 12noon in a clump of trees about 150 metres from the first one.

The clothes on the second body had been burnt to ashes and only the sleeves of a jersey remained on the arms.

“Police in Bulawayo are investigating a case of sudden death which occurred in Woodville suburb on 21 October at around 7AM,” said Chief Insp Simango.

She said the police were alerted by a Woodville resident that someone was dead under a Zesa line at their farm.

“The body was searched and in his black jean trouser was a black wallet which had US$30, ZWL$7 and a photocopy of an ID. Six packets of chillis were in his work suit,” said Chief Insp Simango.

Other items that were at the scene were a green bolt cutter, black woolen hat, Samsung phone, one sock with red and black stripes, half standard brick and a wallet.

“About 150 metres from the scene another body was discovered. The body was of a male adult around his late 20s and was almost naked. The now deceased was putting on a yellow long- sleeved jersey and only the sleeves were left and a piece of a green hooded jacket, a black belt on a grey tattered trousers and brown farmer shoes were nearby”, said Insp Simango.

She withheld the identities of the deceased as their next of kin were yet to be advised.

Jimu farm manager Mr Honest Dube said the incident could have happened around 3AM but the first body was only discovered around 7AM and the second one around 12PM.

“I was going to the dairy at around 3AM and I saw a bright light just like lightning. It streaked across the sky twice from the south. Later, I was surprised to hear women who were fetching firewood saying someone was dead,” said Mr Dube.

“I went to the scene and I saw the lifeless body of a man. I called the police, it was around 7 AM. We discovered another body that was burnt beyond recognition towards midday,” said Mr Dube.

Recently, President Mnangagwa said Zesa workers have a hand in the rampant vandalisation of electricity infrastructure.

Responding to questions from the floor at a Zim-Trade annual exporters conference in Bulawayo last week, President Mnangagwa said for one to tamper with Zesa infrastructure, they must have information on how to handle electricity because there is danger involved.

“We are convinced that those who steal transformers either work for Zesa or are related to Zesa workers because you need some degree of information and technology to steal these transformers and you must know that there is some danger involved,” said the President. The Chronicle

ZPC wants to mine own coal . . . Says existing firms failing to meet demand