I will ‘always’ protect my family, says Prince Harry 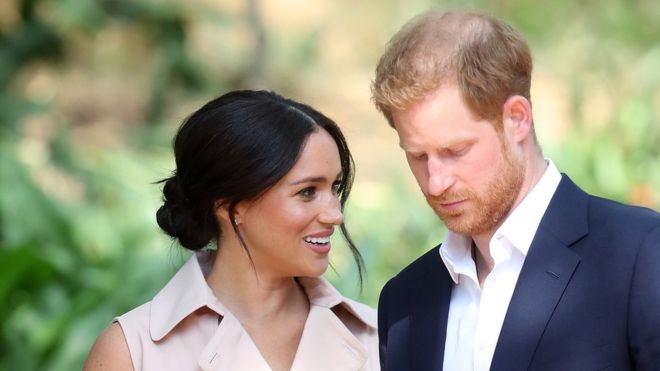 The Duke of Sussex has insisted he will “always” protect his family, adding that he “will not be bullied into playing a game that killed my mum”.

Speaking in an ITV documentary, the duke said he did not want a “repeat of the past”.

Meanwhile, the Duchess of Sussex said her British friends warned her not to marry the prince due to media scrutiny.

The royal couple were interviewed by Tom Bradby during their tour of southern Africa in September.

Prince Harry, 35, was asked if he worried whether his wife may face the same pressures in the spotlight as his mother, Diana, Princess of Wales, who died in a Paris car crash in 1997.

He said: “I will always protect my family, and now I have a family to protect.

“So everything that she (Diana) went through, and what happened to her, is incredibly important every single day, and that is not me being paranoid, that is just me not wanting a repeat of the past.”

Following recent newspaper reports of a rift between the Sussexes and the Duke and Duchess of Cambridge, Prince Harry said he and his brother, Prince William, have “good days” and “bad days”.

He added: “We are brothers. We will always be brothers.

The prince later described his mental health and the way he deals with the pressures of his life as a matter of “constant management”.

He said: “I thought I was out of the woods and then suddenly it all came back, and this is something that I have to manage.

“Part of this job is putting on a brave face but, for me and my wife, there is a lot of stuff that hurts, especially when the majority of it is untrue.”

The Africa tour was Prince Harry, Meghan and their baby son Archie’s first official royal tour as a family.

The duchess, who married Prince Harry at Windsor Castle in May 2018 and gave birth to their son Archie this year, spoke about her experiences as a new royal since that marriage.

The US-born former actress said adjusting to royal life had been “hard”, adding that she was not prepared for the intensity of the tabloid media scrutiny.

“When I first met my now-husband my friends were really happy because I was so happy,” she said.

“But my British friends said to me, ‘I’m sure he’s great but you shouldn’t do it because the British tabloids will destroy your life’.”

Meghan also told the programme that that it was a “struggle” being pregnant and a new mother amid the intense interest from newspapers.

The documentary Harry & Meghan: An African Journey aired on ITV on Sunday evening.

As the tour the documentary followed came to an end, the duke and duchess both brought legal actions against the press.

Meghan is suing the Mail on Sunday over a claim that it unlawfully published one of her private letters.

Prince Harry filed his own proceedings at the High Court against the owners of the Sun, the defunct News of the World, and the Daily Mirror, in relation to alleged phone-hacking dating back more than a decade. BBC News

Brexit: Johnson ‘has the numbers’ in Commons to pass deal, says Raab

Pound slips in early trading after delay on Brexit vote