A gang of seven armed masked men pounced on Prophet Walter Magaya’s parents at their new house in Waterfalls, getting away with a car and US$2 000 cash. 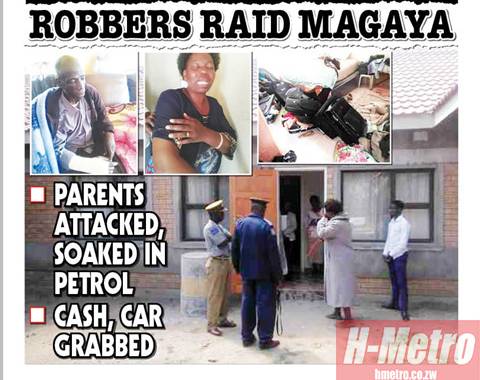 The robbers also took more than RTGS$2 000 and cellphones before pouring petrol on at least five of the occupants, while also threatening to burn down the house.

The events occurred moments after Prophet Magaya had left the premises for his hotel.

According to Prophet Magaya’s mother, the gang demanded more money and that the family led them to where the prophet kept his riches.

“I heard disturbing noise while I was attending to my sick mother in her room.

“As I went to the girls room, I met these masked men who attacked me demanding money from Sunday’s church offerings and see my son.

“They wanted to attack my mother too and out of fear I offered to give them US$2 000, which I had in my bedroom,” narrated Prophet Magaya’s mother.

“One of the robbers was holding a pistol while others were holding batons and a hammer, which they used to attack me and my husband.

“They continued demanding more cash and searching all the rooms and finding another cash box in which I had stashed more that RTGS$2 000 I had realised from my poultry and vending business.

“These men gained entrance after attacking three of our security guards, tying them up and using one of them to lead them into the house,” she said.

She said she suffered a swollen neck, was stripped naked and had petrol poured on her, while her ailing husband (Prophet Magaya’s father) wrestled one of the men before fracturing his right hand in the process.

One of the security guards suffered head injuries, while house helps were attacked with batons and fists.

A report has been lodged with Waterfalls police.

“The Zimbabwe Republic Police is investigating a case of armed robbery that took place in Waterfalls where Prophet Magaya’s mother was assaulted along with five others and forced to surrender cash,” said Ass Comm Nyathi.

“From the preliminary investigations it appears a pure criminal act and police are investigating the case,” he said.

Prophet Magaya’s trusted lieutenant, Overseer Admire Mango said the law enforcement agencies are working to get to the bottom of the constant attacks on the prophet.

“These perpetrators should be brought to book. This is one of the constant attacks that is targeting Prophet Magaya and those around him. This only comes after the church’s private hotel caught fire, lawyers’ offices were broken into signs that someone is targeting the man of God,” he said. H-Metro