The wife of former NSSA board chairman Robin Vela, who was sacked in 2018 following allegations of shocking corporate governance irregularities, caused a stir on Facebook after posting pictures of what she claimed was their £1,3m home in the United Kingdom.

On the 19th of July 2019, Gaudencia Vela posted pictures of the couple’s home to the popular “Classy Zimbabwean Homes … (Kurongedza, Kushongedza Nekuchenesa Dzimba)” Facebook group, before she deleted the post after the pictures were leaked to micro-blogging site Twitter.

The Facebook group has over 88 000 members. In the post she wrote “Yanguwo iyi imba yekubikira” before posting several pictures of what she claimed was their home.

Robin Vela, cleared of corruption by court, vows to fight… 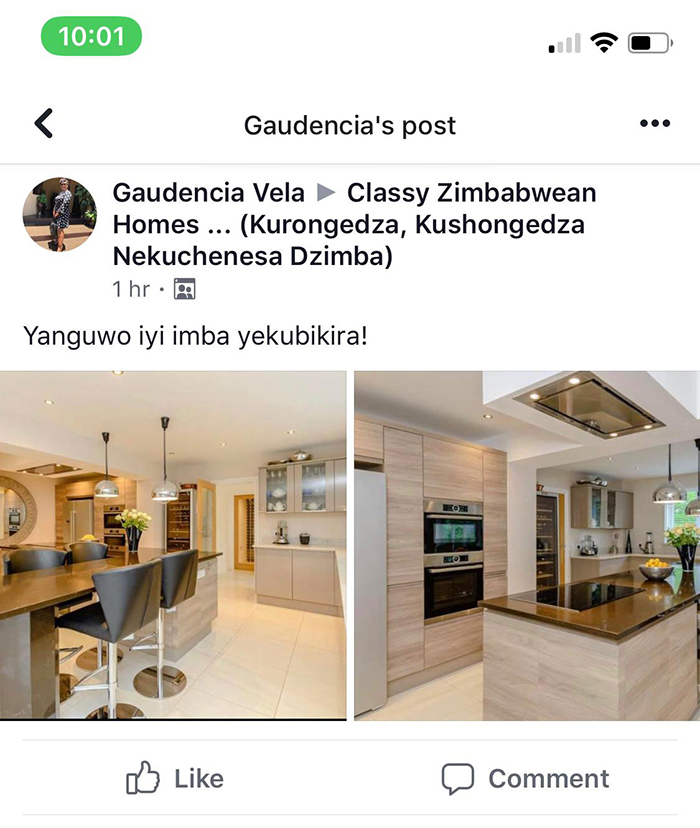 Houses in Gerrards Cross are highly sought after as the area appeals to commuters seeking easy access into Central London and Heathrow Airport, with close links to the M40 and M4 motorway.

Nehanda Radio reached out to both Robin and Gaudencia Vela for comment. Robin claimed that this was “fake news. Someone must have hacked her Facebook. We do not own a house in London.”

Despite this response, Gaudencia has not posted anything about her Facebook account being hacked. Infact, her friends went to her Facebook page to defend her against accusations that she was claiming a house that was not theirs. Some of the friends even confirmed visiting the home.

While Robin Vella insists they do not own any property in the UK, questions remain on why the wife posted pictures of the property to social media and claim it belongs to them. The UK Land Registry records do not show their names under the property.

Auditor-General Mildred Chiri exposed how finances were handled at the institution with NSSA bosses in May 2016 awarding themselves hefty salaries without the consent of the Minister.

Chiri, in her 2016 audit report on State Enterprises and Parastatals, said: “I observed that management’s contracts had amounts that were in excess of the approved framework by the secretary for Public Service, Labour and Social Welfare in May 2016.”

NSSA has been in the news for a number of years for making questionable investments and paying high salaries and perks when pensioners are earning a pittance.

Former managing director Ms Elizabeth Chitiga for example earned around US$202 000 per annum. while the previous management pampered itself with housing loans and luxury vehicles.

NSSA spent US$100 million on investments in “properties with inflated prices and shareholdings in broke companies”. The parastatal lost US$2,5 million in the now defunct CFX Bank, US$12 million on overpriced Starafrica Corporation shares, and US$1,5 million on Africom Continental.

At least US$45 million was sunk in collapsed Interfin Bank. Another US$11,2 million worth of property was lost to local authorities, it gave “non-profitable” loans to parastatals, with the National Oil Company of Zimbabwe getting US$3,1 million and Zesa US$9 million.

In May 2018, Robin Vela sent a dossier to President Emmerson Mnangagwa’s office denying alleged corruption at the State pensions body under his tenure.

“The chairperson has no corporate capacity to enter into contracts on behalf of the authority, or indeed to facilitate the movement of funds … the chairman is not a signatory to the Nssa bank account and therefore cannot disburse any payments,” he said, also requesting for a forensic audit into the affairs of Nssa “to put to bed the various misconceptions being put out,” he wrote.