A vicious brawl between two police officers in Bulawayo suspectedly over a bar lady and which was also captured on video nearly ended in bloodshed, after one of them reportedly sustained bruises on the head and “broken” ribs. 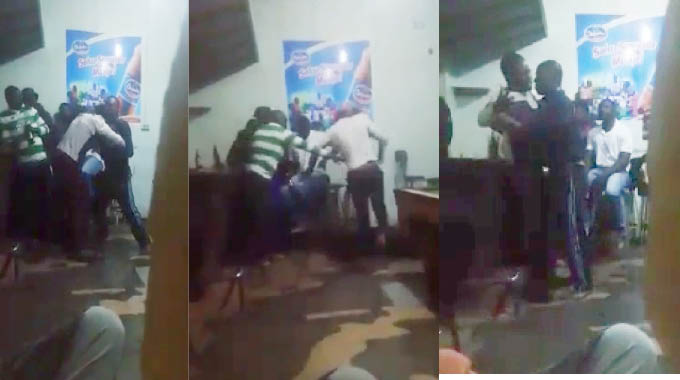 The footage of the “bloody” fight which has since gone viral shows one of the brawlers Sergeant Major Antony Fore (36) being viciously pummelled by his “junior” Constable Chance Moyana (32).

Sgt Major Fore and Cst Moyana who all reside at Ross Camp are stationed at ZRP Kumalo and Njube respectively.

In the video which is in possession of this publication a group of onlookers believed to be also police officers are heard screaming, and laughing, as the two officers battle it out.

In the background, of the melee, Soul Jah Love’s touching song Dai hupenyu hwaitengwa nemari is heard being belted out before a seemingly bruised and restive Sgt Major Fore, supposedly as a result of the attack, shouts at his rival saying, “Kill me”.

The incident which occurred on 14 July at around 5pm at Golden Lion Bar situated at Ross Camp was confirmed by national police spokesperson Assistant Commissioner Paul Nyathi.

“We are investigating the circumstances which led two police officers to fight at Ross Camp and one of them is currently in hospital. A bar lady is, however, alleged to be at the centre of the dispute,” said Asst Comm Nyathi.

According to a police source on 13 July at around 3pm, Sgt Major Fore was at Millennium Bar, Ross Camp, when he approached the bar lady Ntombiyosizi Misiwo who is allegedly at the centre of the ferocious fight, intending to buy beer.

It is reported that the following day at around 7pm, Sgt Major Fore was at Golden Lion Bar when Cst Moyana entered and started accusing him of troubling and pestering his lover — Misiwo.

The accusations reportedly degenerated into an altercation between the two parties. At the height of the argument, Cst Moyana allegedly lost his marbles and heavily descended on Sgt Major Fore, beating him with fists several times on the face.

The daring Cst Moyana went on to violently push his rival to the ground before he repeatedly kicked him in the head and stomach.

As a result of the savage attack, Sgt Major Fore reportedly sustained bruises on the head.

Sgt Major Fore who is also feared to have sustained broken ribs was taken to Mpilo Hospital where he is receiving medication. B-Metro

Cheating man homeless after mistress chucks him out