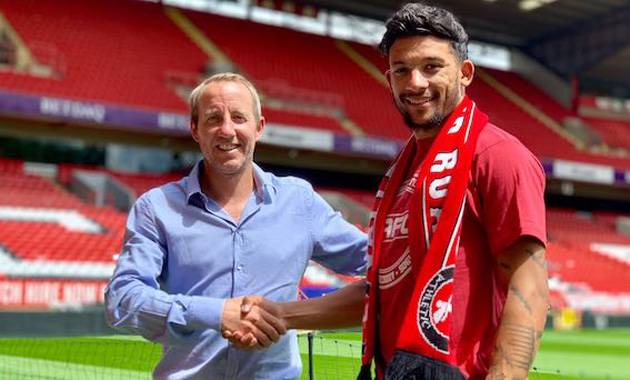 Bonne took to his Twitter to share his excitement of moving to the country’s second tier league having been playing in the fourth tier.

The news comes at a time his failure to obtain a Zimbabwean passport to participate at the 2019 Afcon finals in Egypt has been the subject of intense debate in football circles.

“I am so excited to be playing in the Championship with a club like Charlton, but I will never forget the club and the people who helped give me a platform. I will miss everyone at this truly special club and albeit an emotional farewell, I’m proud to have been an O. I want to say thank you to each and everyone connected to the club – we have a bond that cannot be broken,’ said Bonne.

The striker’s management last week last week blamed Zifa for their client’s failure to obtain a Zimbabwean passport saying they had done everything from their side.

The statement parked debate as some Warriors fans argued Bonne made himself available late.

Bonne said it was always his dream to play at the highest level.

“My time at Orient has come to an end, but it is important to say that it has been some of the best times of my footballing career. Leyton Orient and Justin Edinburgh developed me into the person I am today.

“I walked into the club as a boy and leave as a proud champion of a unique club. An opportunity presented itself towards the end of the season, that was incredibly hard to ignore. At the time, my focus was to win the league and get to Wembley.

“I always dreamed of playing to the highest standard possible and though sad to be leaving Leyton Orient, my excitement for the next chapter was clear,” he said. H-Metro