At least 207 people have been killed and 450 hurt in explosions at churches and hotels in Sri Lanka, police say. 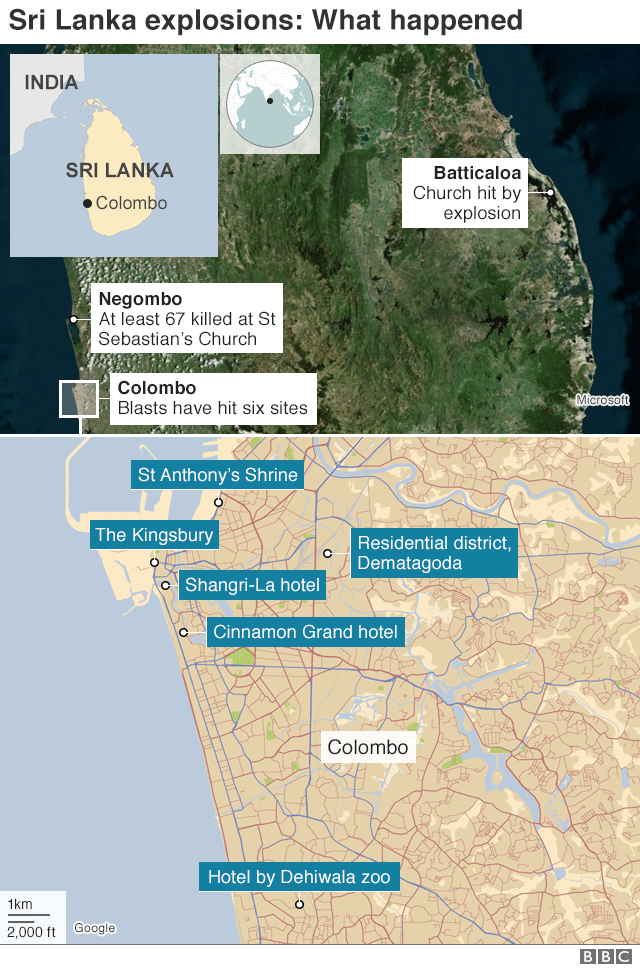 Eight blasts were reported, including at three churches in Negombo, Batticaloa and Colombo’s Kochchikade district during Easter services.

The Shangri-La, Kingsbury and Cinnamon Grand hotels and one other, all in the capital, were also targeted.

A national curfew has been put in place “until further notice” and social media networks have been temporarily blocked.

A foreign ministry official has said at least 27 foreign nationals are among the dead.

Height a huge factor in netball

Reports say seven people have been arrested, but it not yet clear who is responsible for the attacks.

Sri Lanka’s defence minister has said the attacks were probably carried out by one group.

What’s the latest from the scene?

The first reports of explosions came at about 08:45 (03:15 GMT) local time – with six blasts reported close together at churches and luxury hotels.

St Sebastian’s church in Negombo was severely damaged in one explosion, with dozens killed at the site.

Images from inside showed blood on the pews and the building’s ceiling shattered.

There were also heavy casualties at the site of the first blast in St Anthony’s, a hugely popular shrine in Kochchikade, a district of Colombo.

Robert Tyler, who has lived in Sri Lanka for six years, told the BBC that at least two of the hotels appeared to have had their restaurants targeted at a busy time for breakfast.

A seventh explosion later hit near the zoo in Dehiwala, southern Colombo, and an eighth explosion was reported near the Colombo district of Dematagoda.

Media say it was suicide bomber and that three people, believed to be security personnel, were killed during a police raid.

Security has been stepped up at the country’s main Bandaranaike International Airport.

Officials have said people will be able to travel to the airport under the curfew if they produce their boarding pass and identification at checkpoints.

Travellers are being advised to arrive at the airport four hours before their scheduled flight time.

Who are the victims?

The vast majority of those killed are thought to be Sri Lankan nationals, including dozens who were attending Easter church services.

At least five British people – including two with joint US citizenship – are believed to be among the dead.

Netherlands Foreign Minister Stef Blok confirmed in a statement that one Dutch national had been killed.

Colombo resident Usman Ali told the BBC there were massive queues as he joined people trying to donate blood.

He said: “Everyone had just one intention and that was to help the victims of the blast, no matter what religion or race they may be. Each person was helping another out in filling forms.”

No-one was expecting this

Rumours have been reported of more attacks and police have told people to stay inside their houses and remain calm. But there is some element of panic.

There is a heavy military presence in front of all major state buildings. No-one was expecting this, it was a peaceful Sunday morning – everyone was going to Easter services.

I’ve spoken to several priests who were in the church and they were really shocked, as were the police officers.

It was a well-planned, co-ordinated attack but I spoke to the security chief who was there and officials believe it’s too early to say who is behind it.

After the Tamil Tigers were defeated in 2009, Sri Lanka hasn’t really seen this kind of incident.

What have officials said?

President Maithripala Sirisena has issued a statement calling for people to remain calm and support the authorities in their investigations.

PM Ranil Wickremesinghe has condemned what he described as “cowardly attacks”.

“I call upon all Sri Lankans during this tragic time to remain united and strong,” he said.

Pope Francis, in his traditional Urbi et Orbi speech at the Vatican, condemned the attacks as “such cruel violence” targeting Christians celebrating Easter.

Cardinal Archbishop of Colombo, Malcolm Ranjith, told the BBC: “It’s a very difficult and a very sad situation for all of us because we never expected such a thing to happen and especially on Easter Sunday.”

UK PM Theresa May tweeted condolences, saying the “acts of violence against churches and hotels in Sri Lanka are truly appalling”.

Sunday’s attacks are the deadliest seen in Sri Lanka since the end of the country’s civil war in 2009.

The civil war ended with the defeat of the Tamil Tigers, who had fought for 26 years for an independent homeland for the minority ethnic Tamils. The war is thought to have killed between 70,000 and 80,000 people.

The nation has seen some sporadic violence since. In March 2018 a state of emergency was declared after members of the majority Buddhist Sinhala community attacked mosques and Muslim-owned properties.

Theravada Buddhism is Sri Lanka’s biggest religious group, making up about 70.2% of the population, according to the most recent census.

It is the religion of Sri Lanka’s Sinhalese majority. It is given primary place in the country’s laws and is singled out in the constitution.

Hindus and Muslims make up 12.6% and 9.7% of the population respectively.

Sri Lanka is also home to about 1.5 million Christians, according to the 2012 census, the vast majority of them Roman Catholic. BBC News.

Height a huge factor in netball