They tried to glue their bodies to each other, struggling to maintain grip on the slippery rock that could barely support the eight desperate souls. 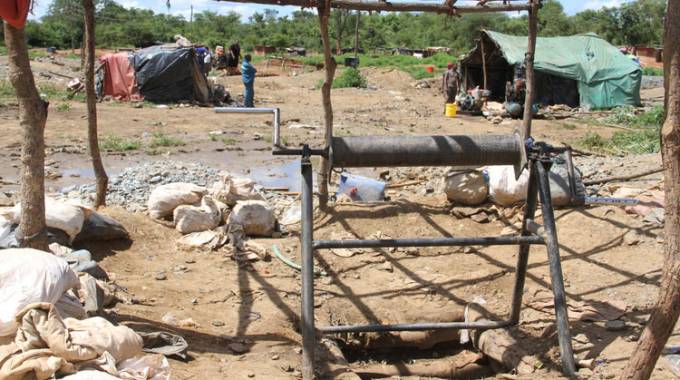 Their cold, stiff hands hung around each other’s necks with backs against the wall – literally and figuratively – of the illegal mine shaft as they battled for survival.

They were neck-deep in water that had smothered their colleagues minutes earlier. The labyrinthine pits of gold, which earlier promised fortune, now reeked of death.

For four days, eight men duelled with death in an epic fight that only had two possible outcomes: life or death.

“I think we have joined the league of the biblical Daniel, who was rescued from a ‘hole’ after days with no food and water,” recounted a visibly shaken Thinkmore Madimutsa, 24, who was the first survivor to be pulled out of the death pits at the collapsed mines in Kadoma.

Darwin – as he is known to his colleagues since he hails from Mount Darwin, Mashonaland Central – is one of the more than 50 gold panners that were trapped underground when Cricket and Silver Moon mines in Battlefields, Kadoma, were flooded on February 12.

Unfortunately, the incessant rains that were pounding the area had forced a nearby dam wall to give way, thereby opening the gates of hell.

On the fated day, at around 8pm, Thinkmore and 19 of his adventurous colleagues entered one of the shafts as per routine.

Another group of 12 fortune-seekers had gone in the shaft a few hours before them.

The artisanal miners wanted to make up for the time lost to the heavy downpour, which had prevented them from working during the day.

“Illegal gold miners can work anytime, so it was not unusual for us to go in at that time of the night. We wanted to cover up for the lost time,” he explained.

“However, whilst we were inside, it began to rain, triggering some small dams which are upstream to burst, causing a flash flood which entered the connected pits.

“Normally when there is danger, those on the surface warn colleagues underground to vacate the shafts. However, since it was during the night, no-one saw the water entering the pits, there was no warning.”

Oblivious of the danger that lurked in the darkness, they continued to work.

Due to the connectedness of the pits, the water stealthily began to fill underground before it spontaneously gushed toward the miners in one deathly wave.

“We were caught unaware. Fortunately, the small rock (near our working area) become our refuge.

“The other miners tried to escape, but they failed.

“The water kept on rising until we were neck-deep. We stood, backs against the wall, and pressed our bodies together.

For a moment, they thought that this was it: it was only a matter of time before rising water drowned them.

But by some stroke of luck, the water began to recede, giving the terrified miners time to relieve their legs – tired from supporting their weight – by sitting on the life-saving small rock.

Fatigue, tiredness and anxiety slowly took their toll and the miners became disoriented.

Added Darwin: “We did not know what day it was or the time of the day it was – time stood still.

“Although we would not talk for long hours due to exhaustion, hunger and cold, our conversations would revolve around if and when we going to be rescued.

“There was also one of us who had managed to keep his ‘loot’. We would mockingly ask him how and when he had collected it.

“Even when he was rescued, he never let the 10kgs out of his sight.

“Occasionally, we would also call the names of some of the colleagues we were with and their silence would confirm our worst fear.

“There was nothing to eat, so we filled our stomachs with the water in the shaft.

“I remember at one point we heard draining machines and we shouted for help. However, no-one heard us and after some time, there was silence.

“At that time, I thought they had given up.”

Unknown to him, the rescue team doggedly continued, but they had lost hope of finding survivors as minutes turned into hours, and hours turned into days.

After what seemed to be an eternity, help eventually came.

It is was almost surreal and by then, the forsaken pits resembled a dirt-filled graveyard.

The bodies of some of the miners who had failed to make it were strewn near the place Thinkmore lay.

“I opened my eyes from a deep sleep; from a distance I could hear voices,” he went on.

“Around us were bodies of our colleagues who had died. A few meters away, was one of the dead bodies.

“I crawled to where it was – I was too weak to walk – softly removed the torch from the body and crawled towards the sounds.

“I could not shout, so I pulled the rope which we had used to enter the shaft days before.

“The pulling of a rope is a form of communication which is used by makorokoza; that moment they knew someone was alive.”

Thinkmore’s four-day ordeal was over.

He was the first to be rescued amid jubilant and relieved relatives and friends.

Seven of his colleagues were hauled to the surface.

But 24 could not make it alive.

In that moment, Thinkmore’s father, Takaruza Madimutsa, was probably the happiest person on the planet.

“When I left Mt Darwin for Battlefields, relatives and friends had gathered at the family homestead for a funeral wake,” Thinkmore’s father said last week.

“We thought he was dead. We had no hope of finding him alive.

“When I saw him for the first time after the rescue, all I could do was to cry. No words could explain how I felt.”

He vowed to take him back with him to Mt Darwin.

“Since he left Mt Darwin in 2016, he has never returned. His mother wants to see him, that is the only way she will believe he is alive.

“Although we are a Christian family, there are rituals we need to perform. I pray he leaves this trade for good and find a better job.

“No sane person goes back underground after going through such an ordeal.”

Although Madimutsa’s ordeal seems over, a few meters away, water is being drawn in one of the mines shaft where four miners are believed to be still trapped.

Relatives of the four gather around the entrance of the shaft praying the miracle that saved Thinkmore and his colleagues is still deep down in those shafts.

“After the news of men who survived for days in a similar ordeal, we have hope that these four can be found alive,” said Thulani Fuzane from Zhombe.

As the sun begins to set at Battlefields, the battle for hope and survival continues. Sunday Mail.