ZIFA vice president Omega Sibanda has rallied the Warriors to defend the national flag and cheer the nation’s spirits when they engage the Democratic Republic of Congo in an Africa Cup of Nations Group G top-of-the-table qualifier on Saturday night. 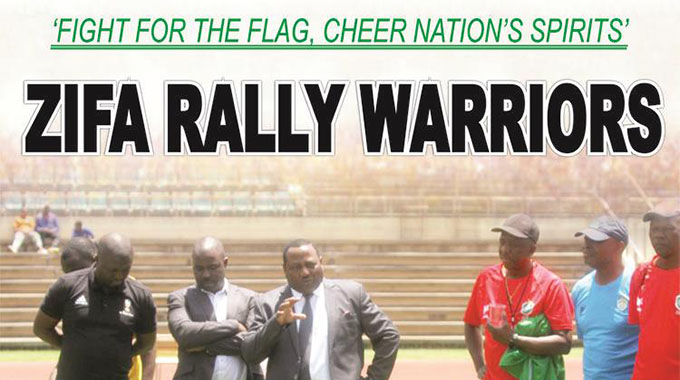 With Zimbabwe and DRC sharing the same number of points, four, and only being separated by goal difference, there will be a number of sub-plots when the Warriors and the Leopards clash in back-to-back night encounters.

Sunday Chidzambwa’s men flew out of Harare in the evening via Johannesburg, South Africa, and were expected in Kinshasa shortly before midnight where ZIFA communications and competitions manager Xolisani Gwesela had already travelled as an advance party. Gwesela said all seemed in place for the battle on the artificial turf of the Complexe Omnisports de Stade Martyrs in Kinshasa.

Crucially for the Warriors was the rallying call they received from the ZIFA leadership.

Sibanda, who was accompanied by board member finance Philemon Machana, told Chidzambwa and his men that they had a responsibility to cheer a nation whose spirits had been deflated by the madness that has been characterised by unexpected price distortions and long fuel queues.

The Warriors are also aware that they need a positive result in DRC to make the job easier in the return leg at the National Sports Stadium next Tuesday.

“As ZIFA we are behind you guys. We are happy to have a team of players like you. Players who are committed to make Zimbabwe known in terms of football.

“So guys, please go and fight for our country and make sure that we destroy DRC.

“It will be much easier if we bring home at least a point, that is, if we cannot beat them there. But if everything else fails, then we have to come and hit them for five here to revenge for what they would have done to us.

“But I know with the kind of players we have, we are going to win. So we are behind you guys. Go well, travel well and let’s make sure we behave. Let’s go and focus on our core business, which is playing football,” said Sibanda.

The veteran administrator also welcomed newboy Tendayi Darikwa into the national team set up after the British-born 26-year-old defender finally secured the documents to represent his fatherland.

Sibanda said the Warriors should not be intimidated by big names in the DRC squad.

“The main objective is to make sure that we win as a team and celebrate as a team. Let’s make our names known all over the world by beating DRC.

“We know where they come from and we are not scared of them. What we want is a win. Good luck as you go there. Make sure you raise our flag as high as possible.

“That’s all we want. That you can do, we know. We have confidence in you. As new players are coming, let’s embrace them and go together as a team,” said Sibanda.

Chidzambwa did not have to go through much hustles to settle for his final travelling squad yesterday as 17 players turned up for the morning training session, which was the only practice they had before departure.

The Belgian-based duo of midfielder Marvellous Nakamba and skipper Knowledge Musona arrived later in the day, in time to travel together with the rest of the squad.

But South Africa-based defender Divine Lunga was ruled out because of injury, while Eric Chipeta of Cape Umoya, who struggled with his game in Brazzaville, was conspicuous by his absence.

Chidzambwa was also pleased with the condition of his players.

“I think from what I have seen, the guys are fit. I can say most of them are fit and we are still waiting for Knowledge and Nakamba who are due to arrive this afternoon (yesterday) and hopefully we are going to have a fit squad and we also want to try and bring a good result for the nation,” said Chidzambwa.

Nottingham Forest defender Darikwa said he was looking forward to his debut in a competitive assignment for the Warriors.

Only on two occasions that Darikwa had a dance with the Warriors game was during friendly matches against Lesotho and Namibia last year.

Darikwa said he was happy with the way he had been received in the squad and is now looking to make his contributions count.

He said he was aware of the magnitude of the task in the Warriors’ hands as he knows some of the DRC players from Europe where the bulk of the Leopards squad has been plucked from.

“They have got a good squad. Most of their players play in Europe and some of them play in the same division that I play in so I know a few of them.

“Basically, it’s going to be a tough game but at the end of the day I think it’s all about us going there and be brave, and believe in our team and what we can do.

“I can play anywhere (defensively) on the pitch. If the manager wants me to play any of the positions, I will be happy to do that and I will help the team.

“First of all it’s important not to lose. We are both tied on four points, so I think to avoid defeat, first of all, especially in the away game will be important for us. But like I said we are going into every game looking to win,” said Darikwa.