Crash claims one, injures nine others 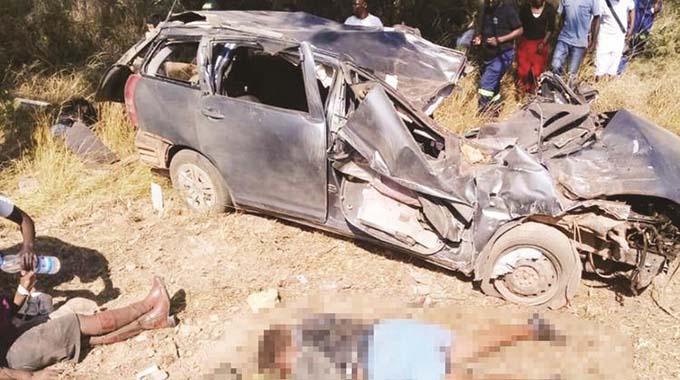 One person died while nine others escaped the clutches of death by a whisker on Thursday last week when a Toyota Wish they were travelling in failed to negotiate a curve, veered off the road and hit a tree in Gweru.

The Toyota Wish had 10 people on board when tragedy struck.

The deceased died on the spot while the nine, who suffered various degrees of injuries, are admitted at Gweru General Hospital.

Gweru City Council chief fire officer Emmanuel Musemwa confirmed the accident which he said happened around midday in Gweru along the Gweru-Harare Highway.

He said the car was coming from Kwekwe travelling to Gweru and when approaching Counsellor Curve, the driver lost control and the car veered off the road.

“It is with profound sadness that I have to confirm that 10 people were involved in a fatal road accident. One died on the spot and nine were injured and were ferried to Gweru General Hospital.

“It is alleged that the driver lost control as he approached a curve and failed to negotiate the bend because of high speed causing the car to veer off the road and hit a tree, injuring the passengers and claiming one life,” said Mr Musemwa.

One witness said: “On approaching Counsellor turn the car failed to negotiate the curve and the driver tried to control the car because of speeding.

“The car hit a tree before t overturning once.”

Acting Midlands Police Spokesperson Assistant Ethel Mukwende confirmed the accident and said she would give a report as soon as she got the details. The Herald