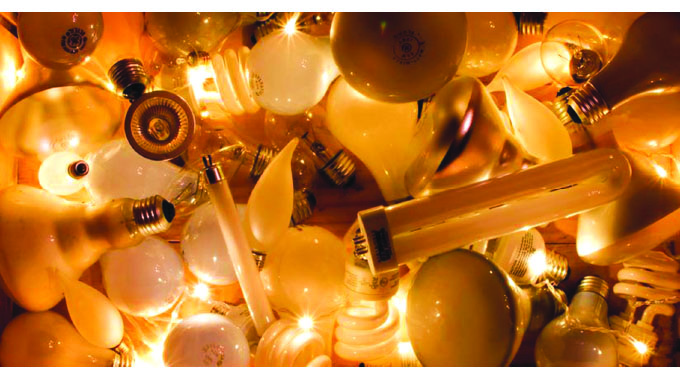 Energy regulator Zera, last Thursday oversaw the destruction of 10 000 smuggled incandescent light bulbs in Harare – but bigger problems are still lurking. About 70 000 more bulbs of the contraband will be destroyed this week, officials say.

It will be the third batch of bulbs crushed since Government passed a law banning the importation, manufacture or sale of conventional lights, such as Thomas Edison’s filament bulb, and fluorescent tubes, in May last year.

Bulldozers rolled over 100 000 banned bulbs — the equivalent of 10 megawatts of electricity, enough to power a small town like Rusape — at the Pomona dumpsite earlier this year.

This is part of the Zimbabwe Energy Regulatory Authority’s (Zera) campaign to improve energy efficiency by phasing out power-guzzling lights in about 164,000 homes, and also in schools and businesses.

The idea is that this will help tackle the country’s two-decade power crisis, save up to 42 megawatts of electricity each year, and prevent the equivalent of 1 300 gigatonnes of carbon dioxide emissions between now and 2030.

At Pomona last Thursday, about $5 000 worth of incandescents were smashed, on the average, which is set to rise to $40 000 in total this week, when the outstanding 70 000 lights are destroyed.

Sam Zaranyika, a senior electricity engineer with Zera, said a crush of 80 000 bulbs will prevent the equivalent of 8MW from going to waste.

“Looking at a place like Westgate (an upmarket suburb of Harare), 8 megawatts can supply about eight Westgates. Or the whole of Chitungwiza at any one time,” Zaranyika told The Herald Business, by phone.

Several countries across southern Africa have outlawed the bulbs, blaming them for wasting quite large amounts of energy as heat.

For example, the incandescent light bulb, which creates light through electricity, heating a thin wire filament to about 3 000°C, converts just about 5 percent of energy it uses to light — the rest goes to waste as heat, experts say.

By comparison, Zera’s preferred alternatives for the incandescent, such as the light emitting diode (LED) and compact flourescent, tend to cost more, but they last longer — about 3 to 5 years — and are more efficient at around 13 to 15 percent.

Zaranyika said the energy regulator had destroyed other smaller numbers of wasteful lights in between the period since the ban and now, working together with tax collector Zimra and the Zimbabwe Republic Police.

But Zera faces significant challenges in manpower and justice delivery, something that could hinder effective implementation of the ban.

Offenders often get off with a fine of as low as $100 — the equivalent of roughly 200 incandescent bulbs of several times the energy demand potential — even though the law that outlawed incandescents was looking for jail terms of up to six months and a fine of $5 000.

That’s largely because the existing legislation had loopholes. By the end of April, more than 170 businesses selling or manufacturing banned lights had been prosecuted in Harare and Bulawayo since the ban took effect last year, and 19 of those jailed.

“We have had challenges with the courts to the effect that we have had to tweak the legislation, which has since gone for publication,” said Zaranyika, the Zera senior electricity engineer.

“The updated version will make it an offence to warehouse or to store the banned product. In the past, offenders were acquitted if they pleaded the stock they were holding was in transit (to another town or country).”

The workforce shortage is so bad that some of Zera’s engineers have to periodically quit their posts on a select day, to carry out the work of electricity inspectors, sniffing out the labyrinth of Harare and Bulawayo’s factories, warehouses and retailers, for banned bulbs.

“We would like to be carrying out more inspections but we are constrained in terms of staff,” Zaranyika told The Herald Business.

“We have basically been concentrating on Harare and Bulawayo. Outside these two cities, it is virtually a free for all. We just don’t have the people to man other areas.”

Currently, there is no staff employed for the specific lights inspection job, but at least two are due to start in September, one in Harare and another Bulawayo.

Tip offs from members of the public, a media campaign and persuasions by word of mouth at stakeholder fora have largely saved the day to date, he said.

Even though it may be difficult to actually get the full complement of foot soldiers to apprehend offenders — and to get the courts to back up the ban — the crushing of wasteful lights by Zera has been a way to get Zimbabweans to listen to its message about the benefits of improved energy efficiency.

And Zimbabweans, who in recent years have endured some of the worst power cuts in the country’s history, are expected to know better. At the height of electricity shortages in 2015, some households had power for just 4 hours a day. And sometimes not at all.

Energy efficiency is a key component of Zimbabwe’s plans to cut carbon emissions by 33 percent — or 17 300 gigatonnes — by 2030, under the Paris Agreement on climate change.

Much of the cuts are to be achieved by increasing investment in hydro and solar power and by improving energy efficiency, Government says.

Crash claims one, injures nine others