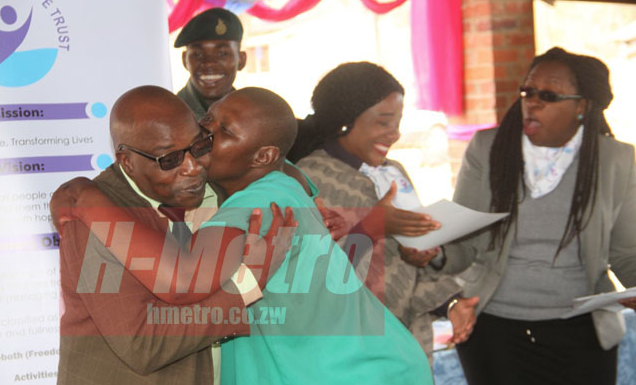 A female inmate caused a stir when she demanded a kiss from officials that included men at graduation ceremony at Chikurubi Female Prison yesterday.

Officials including the guest of honour, Senior Assistant Commissioner Nobert Chomurenga did not accept the request from Esther Katandawa as she received her certificate having attended a Life Skills course with Wellspring of Hope Trust.

Snr Ass-Comm Chomurenga and provincial official in the ministry of Women Affairs, Gender and Community Development Mr Chimboza were heard saying as Esther advanced to them holding them firmly by their waist.

The incident left other inmates and guests in stitches.

In a separate interview with H-Metro one of the inmates appealed to government to consider their need to have time with their husbands when they visit them.

“We are aware that inmates have demands and some of the demands are to have time with their relatives,” said Ass-Comm Banda.

“We have started a family programme where we allow inmates to meet their relatives and families the whole day for a week.

“Those who want to have more time with their families are going to have that chance in August and we urge people to visit prisoners to quench their thirst to meet them.

“We are not yet allowing luxury time to those with extra demands like conjugal rights since we have to deal with serious issues that addresses their major problems.

“To those who want luxury they must make sure they do not commit crimes,” said Ass-Comm Banda.

“The Trust saw the need to train inmates after our several visits here donating food and clothing.

“We discovered that training inmates would help them to start the businesses when they are released and we are making a follow up to those, who have since benefited from amnesty granted by His Excellency.

“We started in February with more than 100 students but today we managed to give certificates to 70 since some were released before they finished the courses and we will continue with those released.

“The only challenge is some of the released are from far away towns but every effort is being carried to make sure we fully help them,” said Tariro. H-Metro

I am in control: Tamirepi