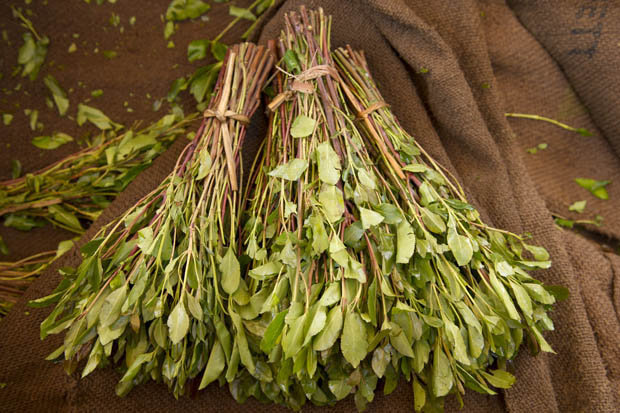 POLICE in Bulawayo have arrested two men found with a consignment of khat — a dangerous drug —with a street value of $135 000 which was destined for the United Kingdom.

The police said khat is relatively rare in Zimbabwe but is common in Eastern African countries.

Bulawayo police spokesperson Inspector Precious Simango yesterday said police intercepted the contraband after it was shipped from Ethiopia en-route to the United Kingdom.

She said police sources informed detectives that a consignment which was supposed to be collected by Chinembiri contained dangerous drugs.

“We have arrested two suspects in connection with dealing in dangerous drugs. Our detectives received a tip-off that a consignment of dangerous drugs was destined for Tshabalala suburb.

“The detectives monitored its transportation from Robert Mugabe International Airport in Harare to Bulawayo where it was due for collection by one suspect called Chinembiri,” said Insp Simango.

She said instead of Chinembiri receiving the parcel in Bulawayo, Shaba flew into the country to collect the consignment.

“Shaba lied to courier services agents that Chinembiri had visited his rural home and he would be collecting the parcel on his behalf. He was told to bring Chinembiri’s ID.

“He brought it later but it turned out that Mr Chinembiri was actually in the city. The two were arrested with the drug, street valued at $135 000,” she said.

Insp Simango said police were concerned that hard drugs are being been intercepted in the country as they are being smuggled to other countries.

She said the latest incident comes barely two months after the police intercepted 3,14 kgs of cocaine with a street value of $470 000 bound to South Africa from India.

“We are worried that the country and its citizens are being used by drug dealers to smuggle narcotics. Zimbabwe has no history of dealing with these hard drugs and we believe drug dealers want to exploit the country’s reputation to smuggle these drugs without being anticipated in other countries. Ethiopia is much closer to Europe so the question is why someone would want to send their contraband via Zimbabwe?” she asked.

Insp Simango said police are alert and will continue to arrest such criminals, urging the city’s citizens to desist from accepting parcels from dubious sources.

A detective assigned to the police CID drugs station Detective Sergeant Lovemore Ncube said khat is hardly used in Zimbabwe. Its users chew its leaves especially when it’s still wet and get high.

The drug is said to cause euphoria and loss of appetite. Dt Sgt Ncube said it can be processed into powder and tablets which can be very addictive.

Shaba and Chinembiri appeared briefly before before Bulawayo magistrate Ms Adelaide Mbeure yesterday and were not asked to plead to charges of unlawful possession of dangerous drugs for the purpose of dealing in that drug.

Their lawyer Mr Byron Sengweni of Sengweni Legal Practitioners is set to apply for bail today. The Chronicle

Karuru out of COSAFA Cup