Supporters of President Emmerson Mnangagwa’s nephew, Tongai yesterday staged a demonstration in Harare South after he failed to make it onto the list of candidates selected to contest primary elections to represent the ruling party in the National Assembly polls.

On Saturday, Zanu PF secretary for the commissariat Engelbert Rugeje announced the names of people who would be representing the ruling party in the forthcoming elections set for July this year and much to the chagrin of his supporters, Tongai’s name was missing.

Eleven people, including Tongai’s bitter rival, war veterans leader Douglas Mahiya, qualified for the primary elections that will be held this Sunday. Zanu PF supporters in the area, backing the president’s relative, swiftly poured into the streets demonstrating their anger.

Contacted for comment, Tongai repeated his uncle’s popular refrain, “the voice of the people is the voice of God” and said he will listen to the people of Harare South.

“I have been away for a few days only to hear unconfirmed reports on social media platforms that my CV was rejected by the national commissariat. I have not received any official communication regarding this issue,” Tongai told the Daily News.

“If it’s true that my CV was rejected, it would be a sad day for Zanu PF and democracy especially when … Mnangagwa has been stressing that the people’s voice should be heard. 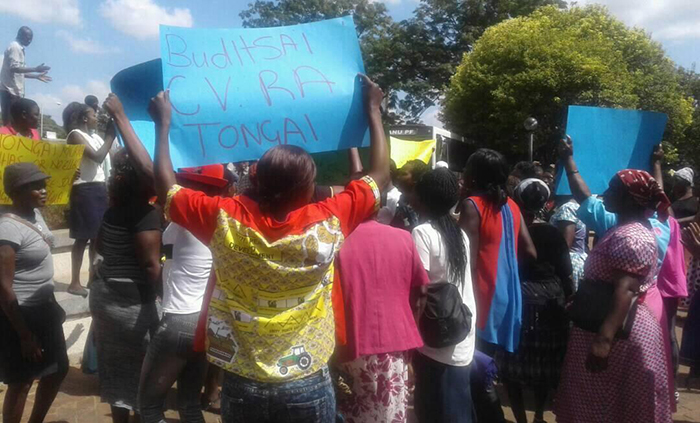 “Am ready to present my manifesto to the people of Harare South like any other candidate and if awarded the opportunity to serve, am willing to be a servant leader to them.

“I believe I have served the party well and I have been a committed cadre for over 20 years. I pray and hope that it’s not true that am not in the race,” said Tongai.

Yesterday some of the Zanu PF supporters said if their candidate is not in the primary elections race, then there is no need to hold them.

“Harare South, we are going to be used as a case study for rebellion. Bhora musango, mark my words,” said one of the fuming demonstrators.

Another one quipped, “Takamira namudhara wake gore riya zvakaoma tikafamba nema passport muhomwe (We stood by his uncle when odds were against him and we are going to stand by him).”

Mnangagwa was hounded from Zimbabwe and jumped the Mozambican border after claims he had been marked for assassination by former president Robert Mugabe, who had fired him.

With the help of the military, Mnangagwa went on to turn the tables against his tormentors, making a triumphant return to be president after a military takeover.

Another supporter of Tongai said since they now have a listening president, they will launch cyber appeals to ensure the decision to block their preferred candidate was overturned.

“The good thing now is that we have a listening president, there is no going back, let us go to his Facebook page and lay our grievances, he will listen to us.
“He has told us to use the social media, so let us do that,” said another protestor. DailyNews

Chiwenga back from China…. defies protocol by avoiding self-isolation