Two armed robbers yesterday attacked three illegal fuel dealers and got away with more than $250 at gunpoint at West Nicholson in Matabeleland South. 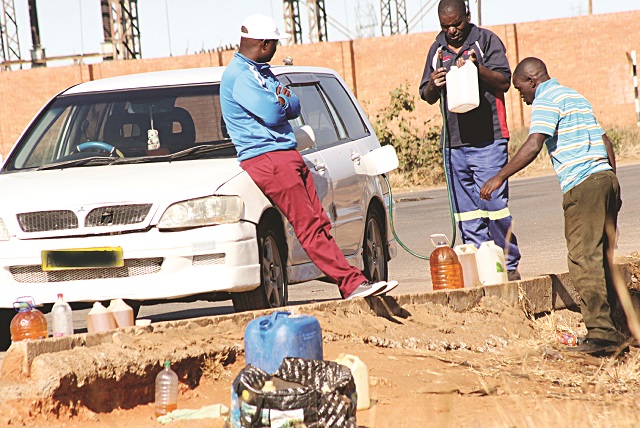 The robbers who are on the run allegedly approached their victims under the pretext of selling 50 litres of fuel to one of them before attacking him and demanding cash.

They even claimed ownership of a truck that was parked near the shops saying the fuel they were selling was in it.

The incident occurred at about 1AM at West Nicholson shops where the fuel dealers had retired for the night in broken down vehicles.

A source close to the case yesterday said the robbers shot at one of the fuel dealers, Mr Peter Moyo, as he tried to rescue his colleague Mr Cosmas Moyo not realising that his attackers were armed with a pistol.

“The robbers approached Cosmas pretending to be selling 50 litres of fuel and during the negotiations he offered them $50 for the full tank. As he was empting one of the tanks so that they could go fetch the fuel, he was attacked by one of the robbers who grabbed him by the collar and pointed a gun at his head,” said the source.

Mr Moyo, the source said, screamed to alert Peter who was still asleep.

The source said Peter blindly advanced towards the robbers and one of them shot at him.

“The one who had pointed a gun at Cosmas’s head was hesitant to shoot Peter as his accomplice ordered him to shoot. Maybe the fuel dealers thought the gun was fake but his accomplice took the gun, shot and missed. The bullet smashed the windscreen of a Toyota Granvia which was parked at the shops,” said the source.

Mr Moyo’s attacker wrestled him for his wallet tearing his pocket and robbing him of $250.

The source said the fracas and gun shots woke up a third fuel dealer Mr Isaac Moyo who was also robbed of $15.

He said it later turned out that the truck the robbers were claiming belonged to a traveller who was not related to the case. “It seems the robbers had a well thought out plan. The truck that they claimed had the fuel they were selling wasn’t theirs. The truck only drove away at 4AM long after the robbers had vanished. What is worrying is where the robbers got the firearm,” said the source.

He said the armed robbery case was reported at West Nicholson Police Station and cops initiated investigations into the matter.