There is an outbreak of cholera in Chitungwiza, with seven cases having been recorded as of yesterday in St Mary’s. 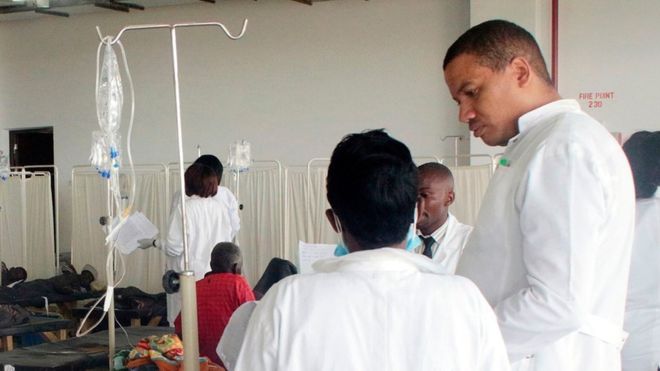 This brings the total number of cases recorded in a fortnight in the town to eight. Health and Child Care Secretary Dr Gerald Gwinji confirmed the outbreak.

He said Government had confirmed four of the cases to be positive of cholera and two people died of the disease.

Although he could not confirm further cases by last night, indications were that deaths and illnesses could actually be more than those recorded by health institutions.

Chitungwiza Ward 5 councillor Mr Richard Chimutsa said as of last night, two people had died while 14 others were rushed to hospital.

“I am still visiting homes of the affected, but majority of those affected are from areas dissected by Chiratidzo Road,” said Clr Chimutsa.

Dr Gwinji said health authorities were still trying to establish an epidemiological link between the St Mary’s and the Stoneridge cases, which killed a father and her daughter last week.

He said provision of adequate and safe water in Chitungwiza was generally still below the expected standards.
This provides a conducive environment for diarrhoeal diseases like cholera.
“Water and sanitation remains the same,” he said.

“The risk of cholera and other diarrhoeal diseases also remains high.
“Some of the settlements, particularly those affected in this case are not appropriate as they promote spreading of diseases.”
Dr Gwinji said Government was working hard to contain the outbreak, which at the moment was concentrated on the traditional cholera hotspots like St Mary’s and Stoneridge.

“We cannot rule out further cases from Stoneridge at the moment as some cases might still be incubating, but both water and sanitary conditions in Stoneridge and St Mary’s are conducive for spreading of diseases such as cholera,” he said.

“We hope we will be able to contain the outbreak as we have put in place mitigatory measures.”
Some of the measures include disinfecting the affected areas, banning food vendors and cholera awareness.

The country has recorded a number of cholera cases this year in Chegutu, Norton, Harare and now Chitungwiza. The Herald