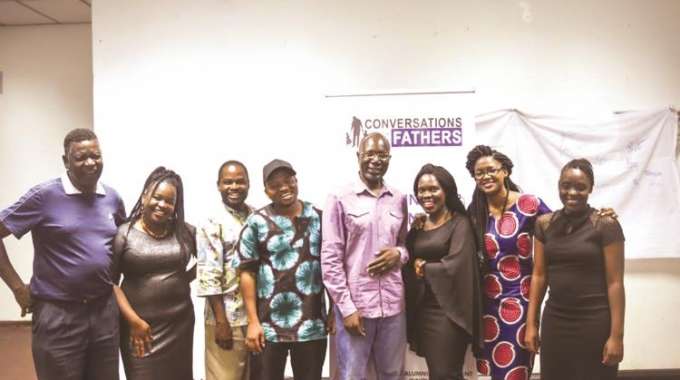 By Mirirai Nsingo
“Every time he raised his hands on her, he killed a prince from a fairytale somewhere deep within her heart, brutally,”  acclaimed author Akshay Vasu once said. The fairytale prince that had been Mukanya in his beautiful wife’s head slowly breathed its last.

Fists, kicks and a cacophony of insults was the menu Mukanya served his wife daily.
Slowly, Mukanya manifested into a beast in his beautiful wife’s mind.
Not the beast of the popular “Beauty and the Beast” legend. He was a beast unto his own beauty.
Where she yearned for protection, he offered the antithesis . . .

“Mukanya”, a film which was launched recently, seeks to instil positive fatherhood under the “Conversations with our Fathers’ initiative. The 22-minute long film, features Stephen Chigorimbo who takes the lead role as Mukanya.

The film follows Mukanya’s journey of redemption. Mukanya is a father around his 50s and has been a violent father. The film opens up with Mukanya going to the village after he has been retrenched from work and becomes a menace in the village. We see his abusive nature in how he treats his wife.

The 100 greatest Zimbabweans: Send us your nominations…

He shows no remorse for his actions until his deeds land him in trouble, and at this point, he changes to become a better man, father and husband. We later see him trying to resolve a case whereby his daughter-in-law (Grace) has been abused by Takudzwa, Mukanya’s son.

The couple is fighting because Grace has found a job and Takudzwa who has been retrenched, refuses to look after the child and therefore denies her the right to go to work. In trying to resolve the issue, Mukanya is reminded by his son of how bad a father and role model he himself was.

Mukanya acknowledges, repents and shares a picture with his son of what the possibilities could have been if he had been a better father, husband and what it means too if Takudzwa chooses to be a better father to his daughter that he is refusing to care for and a better husband to his wife.

Mukanya tells his son of how back in the village, they now started a support group for fathers with the realisation that they had perpetrated violence in their homes and socialised their children into it and how this cycle of violence is not ending. Other fathers were simply not there to offer support in their homes.

Mukanya and his son end up resolving that violence is not a solution and vow to start support groups for men who are in the same scenarios.

It is this understanding and conflict solving without resorting to violence which producers of the film: Yvonne Jila, Karen Mukwasi, Sizhakeke Mukwedini, Sizwile Nyamande Moses Semwayo and Thomas Sithole envisage to see bringing an end to gender based violence.

The producers also seek to challenge unequal power relations between men and women, to de-construct perceptions, norms and values that perpetuate dis-empowerment and prevent women and girls from achieving their potential in life, their dreams and visions.

In an interview with Saturday Lifestyle, one of the producers of the film, Yvonne Jila says the film seeks to instil positive fatherhood in a nation that has been marred by Gender Based Violence and due to cultural factors, child care is a role and duty that has been relegated to women while leaving behind men.

“Through Mukanya’s story, the film also reflects themes such as the legacy that a father can leave behind for his children, non-violent conflict resolution mechanisms, fathers’ roles in care-giving and importance of sharing care-work among others. Also to showcase the benefits of involved fatherhood for the fathers, children and in particular for women and girls.

“‘Conversations with our fathers’ is an advocacy campaign calling for fathers and men to play a positive role in creating safe spaces for women and girls, starting in the home where familial violence is high. This project will produce a short film on positive fatherhood which will then be

“We hope to use the film as a campaign tool for ending gender based violence while fostering positive fatherhood in Zimbabwe,” says Jila.

“Our ultimate goal is to reach out to every province following the general observation that fathers are absent in their families due to a lot of reasons. Some of these reasons include the legacy of colonialism where women were confined to the village and men worked in towns. We still find some families structured like this in all the areas we will be screening.

“We can also talk about the impact of migration, many parts of Matabeleland we have ‘injiva’ who stay across the Limpopo and some come back home once a year or after ages, some come back as corpses.

“Another problem is the economic challenges in the country where we have some fathers being retrenched from their jobs and as a result, when they are not able to provide for their families, gender based violence cases in the home increase. We have seen men who kill their wives when women become breadwinners. Thus, we would like to do a nationwide campaign in the end and work with partners who can help us achieve our mission.

“We have seen the impact of engaging fathers as positive allies in ending violence against women through the MenCare Fatherhood campaign in South Africa and hope to use the film to promote positive fatherhood in Zimbabwe.”

The campaign comes at a time when violence against women and girls is endemic in the Zimbabwean society with a study by the Ministry of Women Affairs, Gender and Community Development in conjunction with Gender Links (2013) noting that at least 68 percent of women in the country have suffered from gender-based violence perpetrated by men.

Gender based violence continues to wear the face of a woman, despite the existence of laws, policies and protocols promote women’s advancement, women are beaten, and others are murdered by their husbands while young girls are married off against their will.

“There is a much broader spectrum of positive roles for men and boys to play than perpetrator or potential perpetrator of gender-based violence. These roles not only prevent and reduce violence against women, but also improve the lives of men and boys by freeing them from these harmful and limiting aspects of masculinities.

“As a result, we can eliminate gender inequalities that hold back the development of our communities and nation to ensure that women and girls we care about do not have to live a life in fear of violence.”

As major perpetrators, the target audience for primary prevention, holders of the social norms and influencers on other men need to be engaged to reduce and prevent gender-based violence. It is upon this background that the “Conversation with our fathers” initiative seeks to use to end gender based violence in the country. The Herald

The 100 greatest Zimbabweans: Send us your nominations before the voting