Alexis Sanchez’s struggles have been clear for all to see since he joined Manchester United. 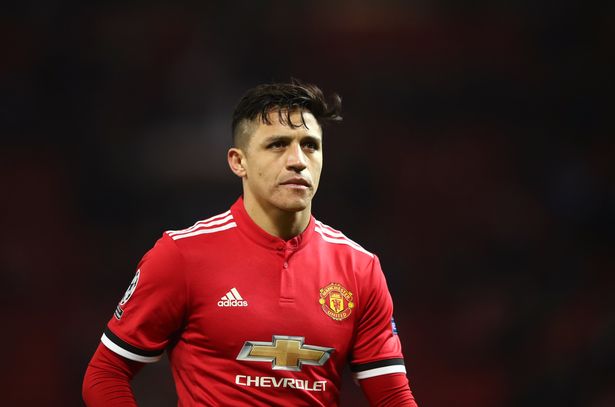 The 29-year-old joined the Red Devils from Arsenal in January, in a deal that makes him the Premier League’s best-paid player.

But things haven’t run smoothly for the former Barcelona star, with Sanchez scoring just once in ten games following his switch.

His performances have come under close scrutiny and the Chilean was left on the substitutes’ bench for the FA Cup quarter-final win over Brighton last weekend. See his reaction to that in the video above.

Arsenal escape Burnley with a point after Jay Rodriguez…

According to The Sun, at half-time of the Champions League embarrassment at the hands of Sevilla, United players rounded on Sanchez and tore into the 29-year-old.

Teammates let rip at him, with claims they were unhappy with his failure to track back when United lost possession and that he plays the game only on his terms – not covering for teammates caught out of position, reports the Mirror.

Additionally, he was reminded that his performances needed to be greater at Old Trafford than they ever were at The Emirates.

However, it’s alleged that it was met with little response, other than a shrug of the shoulders.

Sanchez had little impact against the Spanish side as United were dumped out of Europe.

And the Chilean was subsequently dropped from the starting lineup for the FA Cup quarter-final win over Brighton, remaining on the bench throughout.

Earlier this week Sanchez admitted he had expected more from himself in his opening two months at United.

“As I am self-demanding, I expected something better,” said Sanchez. “After my arrival at United, it was hard to change everything very quickly. I even hesitated to come here [to Sweden, with the national team].

“I had asked permission to miss these games, but then I thought better and spoke with Claudio [Bravo] and told him that we should all be united.

“The change of club was something that was very abrupt – it was the first time I’ve changed clubs in January – but many things have happened in my life that are difficult.”

Tottenham Hotspur are the latest club to be linked with a move for Jonny Evans as his Albion days approach the end.

The 30-year-old has a £3million relegation release clause in his contract that will almost-certainly be activated as the Baggies face relegation to the Championship.

Arsenal and former club Manchester United could also make a move for Evans but the chances of Manchester City reigniting their interest are slim following the recent £57million capture of Aymeric Laporte.

It’s Spurs’ interest that has come to light today, though, with a number of national newspapers reporting the link.

The Telegraph state that the north London club would be interested if they decide to sell 29-year Toby Alderweireld for £40m this summer,

They currently face the risk of losing him for £25m in 12 months’ time because of a clause in his contract so Mauricio Pochettino is weighing up options,

As Evans has played in the Champions League for Manchester United and also has played 67 times for Northern Ireland, he represents a safe, experienced option who won’t block the pathway of the youngsters.

The Baggies captain was interviewed earlier this week and insists he still isn’t giving up hope of survival.

Zlatan Ibrahimovic is poised to leave Manchester United and appears destined for a move to the Los Angeles Galaxy in Major League Soccer.

The Swede was released last summer after a fine first season at Old Trafford ended in a serious knee injury but after getting himself fit again, he was rewarded with a contract until the end of the 2017-18 season in August last year.

However, Press Association Sport understands the 36-year-old is now set to leave United amid speculation over a move to the Galaxy, whose interest in the player has been well-documented.

Ibrahimovic has managed just seven appearances this season, making his comeback in November after recovering from surgery to repair his ruptured cruciate ligament.

His last game was on Boxing Day, when he was substituted at half-time of the 2-2 draw at home to Burnley, and although earlier this month he said he was targeting the Champions League last-16 second leg tie with Sevilla he did not make the matchday 18.

The arrival of Alexis Sanchez in January and the form of Romelu Lukaku have made it even less likely for Ibrahimovic to regain his place and with question marks over his fitness and his contract ticking down, the time appears right for a move.

Manager Jose Mourinho began to pave the way for an exit when he said in January he would not stand in the former Sweden international’s way if he wanted to leave Old Trafford.

Earlier this month the United boss admitted he expected the striker to leave at the end of the season.

Ibrahimovic, who scored 29 goals in 53 matches for United, would be the latest big-name signing for the Galaxy following the likes of former United and Real Madrid midfielder David Beckham and ex-Liverpool captain Steven Gerrard.

Dillian Whyte knocks out Lucas Browne in sixth round in London