The release this week of Marvel Studios’ latest superhero outing, Black Panther, has triggered the enthusiasm of African movie fans and a sense of pride that Hollywood has finally plugged a gap. 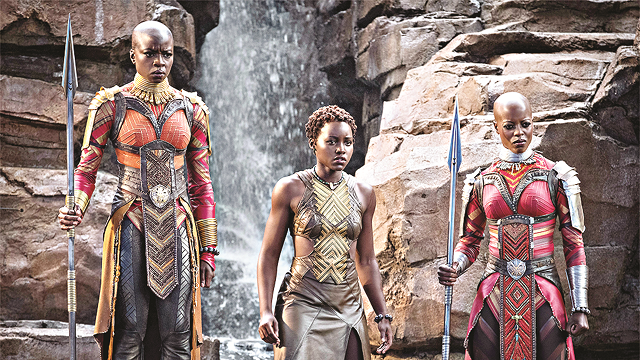 With an almost entirely black cast and a young African-American director, Ryan Coogler, the film has already won rave reviews for its stereotype-busting portrayal of Africa.

The film is expected to take in at least $250 million worldwide between Friday and Monday, according to analyst projections and disprove the notion that movies rooted in black culture cannot be global blockbusters.

After all the hype, select audiences in African countries have got a sneak preview of the new blockbuster and many agree it’s an important moment in popular culture. Locally, the movie was premiered in Harare on Thursday and Bulawayo last night.

ZiFM Stereo personality, Patience Musa, said the movie made her proud to be African.

Danai Gurira to concentrate on writing

“I especially loved the fact that the soundtracks were African but there’s a scene I felt Jah Prayzah’s track Mudhara Vachauya would have been befitting.

Over and above, this is a great production that is family friendly,” Musa said.Brian Barasa, a 29-year-old Kenyan who says he has loved comic books for as long as he can remember said: “As I was watching the movie with friends, I remember we all felt part of history. This is beyond a movie. This is huge.”

Set in the fictional African country of Wakanda, the film’s focus on black protagonists, stories and culture sets it clearly apart from other superhero movies.

But hero T’Challa, the king of Wakanda played by Chadwick Boseman, is not the first black superhero to hit the big screen. Barasa, who co-founded the Nairobi Comic Convention in 2014, points out that was “Blade” – a vampire with human traits portrayed by actor Wesley Snipes in the trilogy between 1998 and 2004.

“But Blade was American,” said Barasa.

“In a conversation I had recently, somebody pointed out, ‘Blade had to walk in order for Black Panther to run’,” he noted.

So far Black Panther has generated an enthusiastic response from communities in Kenya and Nigeria that are often stereotypically represented on screen.

Superhero fans also appear to appreciate the film’s visual qualities, the reproduction of costumes from the original comic and the characters’ accents.

“Usually in Hollywood, you’re just African. They will use a Nigerian actor with a Nigerian accent to play a Kenyan character or vice versa,” said Sope Aluko, one of five Nigerians in the film, at the Lagos premiere in Nigeria this week.

“We knew that we had a responsibility towards Africa and the black community in general while shooting this movie,” she added.

“But I didn’t expect anything like this, all this enthusiasm coming from the black community.”

Commercially, the film looks set to break some box office records. But for some, the potential cultural impact could be its most important achievement.

“It’s a very important statement to the world that Marvel Studio can have a movie entirely based on African characters,” said Kenyan actor Moses Odua at the African premiere in Kisumu, a town in the west of the country.

“That is so nice, it’s going to turn away some of the stereotypes we have on Africans.”

In the film, Wakanda has skilfully exploited its mineral wealth to become the most developed and technologically advanced country in the world — a complete reverse of the run-of-mill portrayal of African nations as backward, poverty-stricken and disease-ridden.

Yet, at the same time, Wakanda is also anchored in African values of community and spirit.

“I like the Afro-future description of the continent and the mix of modern and tradition. They show regular Africans working with technology,” said Chiko Esire (32), in Lagos.

Others took pride in the purely commercial aspect of Black Panther, which has already beaten The Hunger Games and Beauty and the Beast in pre-sales in the United States.

“I’m not a movie fanatic, I only watch maybe three or four movies a year,” said 27-year-old James Odede, who runs an IT firm.

“But I am excited about this one because it tries to illustrate that a movie that is predominantly black-cast can still sell and do well.”

Kenya film-maker Jinna Mutune (29), believes the film has achieved its aim of showing African culture in a positive light but that more black-focused movies need to be produced.

For those who have not watched the movie yet, it is being shown at Ster Kinekor cinemas nationwide. The Chronicle

Soaked. . . Bosso trail after match is abandoned due to heavy rain

Danai Gurira to concentrate on writing