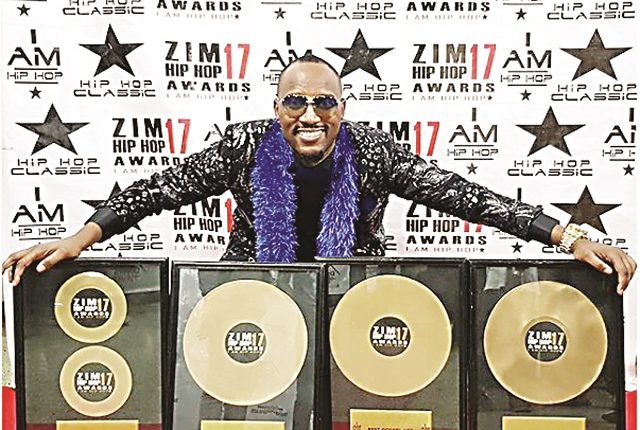 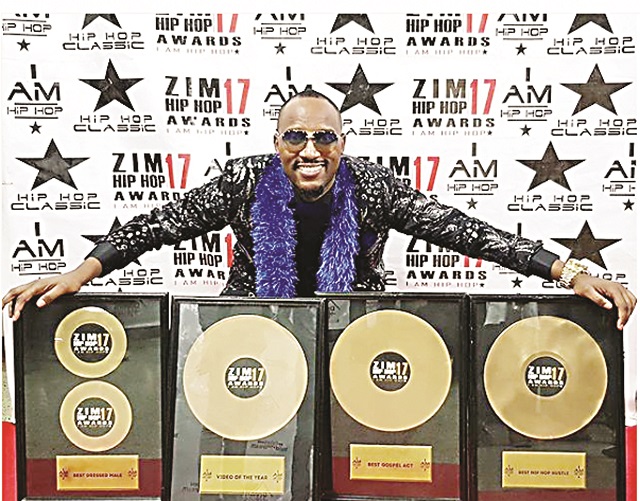 So happy was Mudiwa after receiving his last award (Best Dressed) he slipped and fell when he was getting off stage, which drew laughter from Stunner who had eyed the award.

Kikky Bad A$$ made a name for herself with two accolades when she landed the coveted People’s Choice Award and the Best Female Artiste.

It was a night of disappointment, however, for rapper POY who was nominated five times but did not land even one award in his home town.

After the awards Mudiwa said all glory goes to God.

“I’m so happy, excited and it’s the biggest win on the night and all glory to God and I’m grateful. I thought I was going to win Best Gospel and Video of the year, but I didn’t think I’d win all these other awards,” said Mudiwa.

The awards were, however, marred by technical glitches all through the night with the sound system causing the late start of the show. However, it was a blessing in disguise as hosts Cal-Vin and ASAPH took the opportunity to hold a Cypher.

Rappers such as Orthodox Six, P2DaOH, Biko Maximus and Indigo Saint took up the challenge with both hands and had the crowd nodding their heads in approval of the lyrics they were spitting on stage.

The production of the show was poor and disorganised with everything in stops and starts.Nothing was seamless.

At times the mics would not have volume which negatively affected the performances with some that were supposed to electrify the stage being let down by the PA system.

There were two mics that had long cords shared between the MCs, those who are presenting awards and the performers which looked clumsy for a national award ceremony. A cordless mic would have helped.

Organisers should up their game next year and if they want pointers as to how an awards ceremony is produced and executed they should attend the Bulawayo Arts Awards that will be held in the middle of next year.

There was light at the end of the tunnel as in all this disorder there were top performances which came from a female hip hop artiste Natasha Muz whose energy on stage and the way she delivered her verses effortlessly more entertaining than everyone else.

She had the whole auditorium jumping and received a standing ovation after she left stage.

The red carpet had all the glitz and glamour with local celebs showing off their outfits where the likes of Stunner were ever present taking pictures with fans. Other hip hop artistes who were at the awards include Tehn Diamond, Take Fizzo, Jnr Brown, Mr Kata and T1Nda.