Journalist Violet Gonda on Twitter: “G40 Ministers @ProfJNMoyo and @Hon_Kasukuwere reportedly in hiding. They had already left their homes when military arrived after 1am.”

Now official and on ZBC TV, the military has taken over. They are saying Mugabe and his family are safe but they are targeting “criminals surrounding” him to remedy the “country’s suffering.” Said “as soon as they are done situation will come to normalcy.” 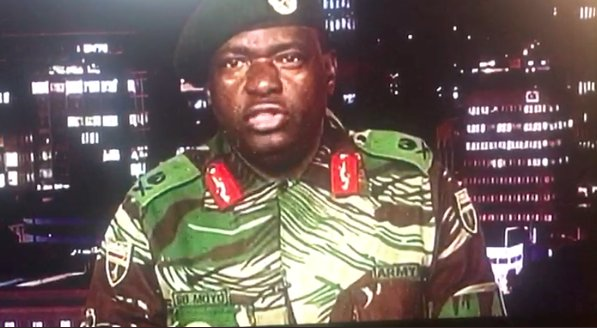 A Harare resident has told AFP that gunfire erupted near President Robert Mugabe’s private residence. “From the direction of his house, we heard about 30 or 40 shots fired over three or four minutes soon after 2:00 am,”

Due to the uncertain situation in Harare, incl. reports of unusual military activity, we advise British nationals in the city to stay safely at home/indoors until the situation becomes clearer. Monitor this account for updates.

Due to ongoing uncertainty in Zimbabwe, the U.S. Embassy in Harare will be minimally staffed and closed to the public on November 15.  Embassy personnel will continue to monitor the situation closely. @StateDept

I have spoken to a trusted ZBC staffer. The ZBC complex is now under control of the military. The news reader Rumbi Takawira was roughed up a bit according to my source. Some journalists were also roughed up. The military is controlling who comes in or out of the Broadcast Center.

20:52: Temba Mliswa “BREAKING- JUNTA has taken over Programming at ZTV as I speak”

“The President is panicking and he has sent Mzembi to Zambia and to other SADC countries, but they seem not to be prepared to assist. We saw the position of the ANC through Gwede Mantashe saying that they will not be involved. Lunga is the only one who is with Mugabe on this.”

“Sources suggest that these delays are all in an attempt to avoid the escalation of the situation. No blood has to be spilt.”

Earlier in the day Reuters reported four tanks were seen heading towards the Zimbabwe capital Harare on Tuesday, witnesses said, a day after the head of the armed forces said he was prepared to “step in” to end a purge of supporters of ousted vice-president Emmerson Mnangagwa.

Two armoured personnel carriers were positioned on the outskirts of Harare late on Tuesday and soldiers were directing traffic, a Reuters witness said, a day after the head of the army threatened to intervene in politics. The soldiers deployed on Harare Drive, a major thoroughfare, ordered passing cars to keep their windows up and not ask questions.

“Don’t try anything funny, just go,” one soldier said to a Reuters reporter.

Mugabe chaired a weekly cabinet meeting in the capital on Tuesday. Afterwards, the ruling party, ZANU-PF, said it stood by the “primacy of politics over the gun”. It said Chiwenga’s statement suggests “treasonable conduct … meant to incite insurrection.”

“Defending the revolution and our leader and president is an ideal we live for and if need be it is a principle we are prepared to die for,” Kudzai Chipanga

“A military coup is the nuclear option. A coup would be a very hard sell at home and in the international community. They will want to avoid that.”