A US submarine has arrived in South Korea, amid worries of another North Korean missile or nuclear test. 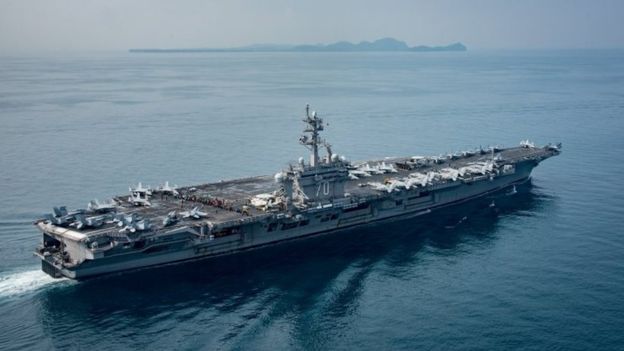 The missile-armed USS Michigan is set to join an incoming group of warships led by aircraft carrier Carl Vinson.

North Korea is celebrating its army’s 85th founding anniversary on Tuesday. It marked the event with a large-scale firing drill, South Korea said.

Tensions have risen in the area in recent weeks, with the US and North Korea exchanging heated rhetoric.

Experts fear Pyongyang could be planning more tests – it has marked some key anniversaries in the past with nuclear tests or missile launches.

However, South Korea’s defence ministry said “no unusual development had been detected”.

Instead, the North conducted a large live-fire drill around the city of Wonsan, South Korea said.

“Our military is closely monitoring the North Korean military’s movement,” the Office of the Joint Chiefs of Staff said.

In an unusual move, the entire US Senate has been asked to attend a briefing on North Korea on Wednesday at the White House.

The USS Michigan docked at South Korea’s Busan port on Tuesday, in what it called a routine visit. It is a nuclear-powered submarine carrying 154 Tomahawk cruise missiles and 60 special operations troops and mini-subs, reported the South Korean newspaper Chosun Ilbo.

The submarine is expected to take part in military exercises with the Carl Vinson warship group, which the US said it was dispatching to North Korea earlier this month to “maintain readiness” in the region.

At the time, Mr Trump said that he was sending an “armada” to the region and that the US had submarines which were “very powerful, far more powerful than the aircraft carrier”.

Pyongyang reacted angrily to the aircraft carrier deployment, threatening to sink it and launch a “super-mighty pre-emptive strike” against what it called US aggression.

However, the US warships caused some confusion and attracted mockery when it emerged that they actually sailed in the opposite direction, away from North Korea, after the announcement. However, US Navy officials said they are now proceeding to the region as ordered.

China is North Korea’s only ally and main trading partner – and the US has been urging Beijing to help put pressure on Pyongyang.

Chinese President Xi Jinping spoke to Mr Trump on Monday, urging all sides to “maintain restraint and avoid actions that would increase tensions”.

‘Swords at the ready’: The escalating rhetoric of a crisis

Pyongyang has long been known for its overblown statements but, increasingly, the US is matching its tone. Here are some recent examples:

Trump said Navy ships were headed toward North Korea…. they were going the…