Zimbabwe’s footballers have once again made a huge statement in the South African Premiership with the Warriors internationals dominating the top 20 players to have dominated the Super Diski in the last two decades. 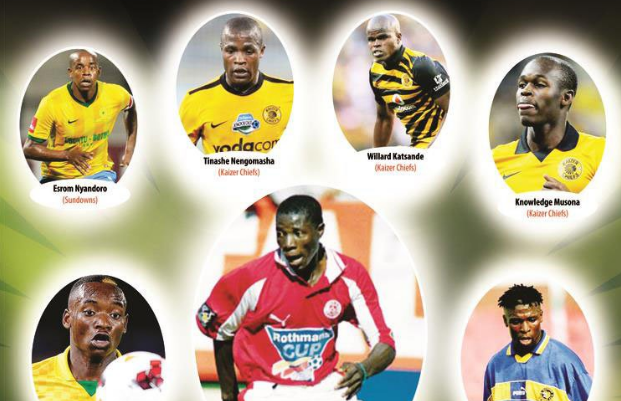 In the year that the South African Premiership will be celebrating its 20th anniversary, that country’s leading soccer magazine Kick Off has this month commemorated the occasion by putting together a list of the best 20 foreigners to have plied their trade in the Super Diski.

Kick Off, in their latest issue, indicated that the period under review started from the 1996 /97 season, which is the modern era of the Premiership.

The magazine’s staff, although aware that their choices could spark fierce debate among the game’s followers in and outside the country, reckoned that their selection represents the best imports to have made an impact and added glamour to Africa’s richest league.

“These (the names on the list) are limited to players who joined from the 1996 /97 season onwards and the list is in order of impact made and the achievements garnered during their time in South Africa.

“These names should bring back some fond memories and spark fierce debate, but we encourage you to just take time and appreciate the contribution other foreign nationals have made to making the PSL the league it is today. Enjoy,’’ wrote Kick Off.

With Kick Off considering the players who made an impact from 1996 /97 onwards, it also meant that such Zimbabwean stars like Wilfred “Silver Fox’’ Mugeyi, Alexander Maseko, the late Francis Shonhai and Robson “Sarafina’’ Muchichwa, who held the South African top-flight spellbound prior to the period under review were not considered.

Zambian striker Collins Mbesuma was rated the best of the list of imports with the burly Chipolopolo forward being rewarded for the impact he made during his spell at Kaizer Chiefs.

Mbesuma who had a stint with Portsmouth in England is back and is still playing in South Africa with Highlands Park.

But there is no doubting that it is Zimbabwean internationals, who have dominated the South African game with seven former and current players featuring prominently on the 20-man list.

Musona is regarded the best of the Zimbabwean lot at number six with Kick Off in the citation acknowledging the “Smiling Assassin’s’’ scoring prowess.

The 26-year-old striker is now playing in the Belgian League with KV Oostende.

“Seen as Mbesuma’s true replacement at Chiefs, Musona’s pace and finishing made him a nightmare for defences and he top-scored with 15 goals in the 2010/ 11 season’’.

Billiat was rated 11th with Kick Off reckoning that the player’s impact could have gone unnoticed had he not made the big money move from Ajax Cape Town to Mamelodi Sundowns.

“Billiat probably would have flown under the radar of the underachieving, but talented imports had he not made the switch from Ajax Cape Town who he had joined from CAPS United in 2010.

“Since his move to Chloorkop in 2013, he’s become a PSL champion twice and an African champion of the Champions League and Super Cup variety’’.

The magazine also observed that both Billiat and Musona are 26 and came through the same Aces Youth Academy in Harare.

For Mwaruwari — the 12th best player on the ratings — whose career later took him to Switzerland, France and England, it is the impact he made at Cosmos after leaving Zimbabwe in 1996 that won him a place on the top 20 list.

“Another Cosmos product, Benjani joined Ezenkosi in 1996 and went on to be a hit upfront. He later earned a move to English clubs Portsmouth and Manchester City’’.

“Brute and class have seldom combined so seamlessly in a player. Nengomasha was the fulcrum of Ted Dumitru’s double title-winning team of the mid 2000’s’’.

“Nyandoro was all dominance and class in the Sundowns midfield from the time he arrived in the middle of 2004. His baby face belied the nature of his bullet shot’’.

Katsande who led Zimbabwe at the 2017 African Cup for Nations in Gabon in January is ranked 17th and just like Billiat he has been rewarded more for his contribution to the Chiefs’ cause than his previous club Ajax Cape Town.

“Another in the long production line of hard-grafting midfielders who migrated south. Katsande arrived at Ajax in 2010 and made a move to Kaizer Chiefs a year later where he won two titles under Stuart Baxter’’.

The last of the Zimbabweans on the chart Mushangazhike who is a rung below Katsande, made his biggest impact in the South African game while turning up for former Premiership side Manning Rangers where he was a free-scoring striker.

Mushangazhike also had a stint with Orlando Pirates.

“The busy-body striker was brought to South Africa by Manning Rangers in 1997 and immediately felt at home, much to the chagrin of defenders who had to face the dreadlocked assassin,’’ Kick-Off said.

There were places too for Sundowns’ Anthony Laffor who is the first Liberian to win the Champions League, Kenyan Musa Otieno who spent 14 years at Santos in Cape Town, and another Nigerian Onyekachi Okonkwo. The Herald