By  Fungi Kwaramba and Blessings Mashaya 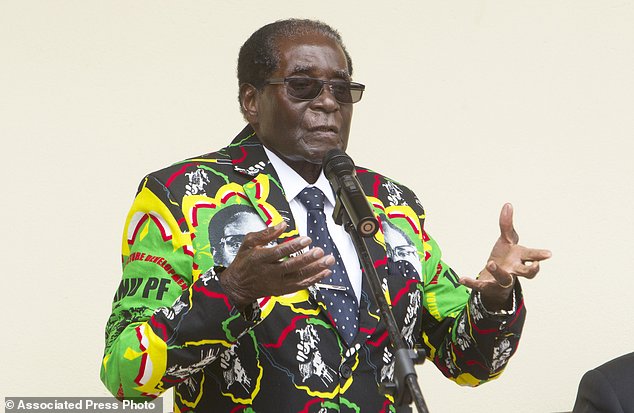 The massive protest also targeted regional party bigwigs who are perceived to belong to the Generation 40 (G40) faction, which is rabidly opposed to Vice President Emmerson Mnangagwa succeeding Mugabe.

The demo is likely to have miffed Mugabe, as it came barely a day after the nonagenarian pleaded with warring Zanu PF officials to stop toyi-toying against each other forthwith, as well as ventilating their grievances through State media.

Well-placed Zanu PF sources told the Daily News last night that many bigwigs were also “sweating” over their political futures, as the party holds its politburo meeting today, and central committee gathering tomorrow — as the former liberation movement’s mindless bloodletting worsens by the day.

Among the other party heavyweights who were targeted by the Masvingo demo yesterday were Tourism minister Walter Mzembi and former deputy ministers Tongai Muzenda and Paul Chimedza — who were sacked from their positions for allegedly supporting former Vice President Joice Mujuru during the deadly 2014 purges.

“I hear they demonstrated against us and it’s not surprising because I know Mahofa is behind all this. Haafi akandiregerera. Haaregeri munhu (She will never forgive me and she doesn’t forgive anyone).

“I exposed her over the $2 000 she stole, so the moment she gets a chance to nail me she will gladly grab it.

“I am tired of being abused by Mahofa over this money. But I am an honest politician and so I could not have lied to the first lady. I had to tell the truth about the money because I am strongly behind her leadership and that of the president.

“They say they (Team Lacoste) don’t want a Zezuru to lead, but we are saying we cannot be seen to be playing tribal politics,” Makonese said.

Repeated efforts to speak to Mahofa were unsuccessful as she was not reachable on her mobile.

One of the sources who spoke to the Daily News said all these developments had given today’s politburo and tomorrow’s central committee gatherings even more importance.

Tempers have been running high for some time in the restive Masvingo province, particularly after the politburo surprisingly ordered the region last month to re-run its elections, to find a substantive chairperson.

The elections had been “won” by a candidate linked to the party faction rallying behind Mnangagwa’s mooted presidential aspirations, Team Lacoste.

It is understood that today’s politburo meeting will, among other things, deliberate on the party’s worsening ructions and also consider the new dates for the Masvingo chairmanship elections — in addition to discussing the country’s dying economy, including the worsening cash shortages despite the opening of the 2017 tobacco marketing season.

This week’s meetings are being held against the background of quarrelling within the women’s league, which is headed by powerful First Lady Grace Mugabe.

The well-placed sources who spoke to the Daily News also claimed that the politburo would “definitely” also discuss the ongoing demonstrations against Kasukuwere and his brother and Mashonaland Central acting provincial chairperson, Dickson Mafios — who both stand accused of causing mayhem in the party.

Kasukuwere’s party foes also vowed yesterday that if the combative Local Government minister and other bigwigs, who include Sandi Moyo, Jason Machaya and Mahoka were spared the axe this week, they would hold “even bigger protests against the G40”.

“Tomorrow (today) kunotemwa vanhu (people will be dealt with) . . . People who are facing demonstrations are facing the same charges of plotting to remove President Mugabe which (former Vice President Joice) Mujuru was facing and I am sure Kasukuwere will face the music.

“Although his allies might try to downplay his sins, he must be treated as he has always treated other people who were expelled without following due process,” a senior party official told the Daily News.

On her part, Sandi Moyo said she would attend today’s politburo meeting despite the moves by her women’s league colleagues to expel from her position as Grace’s deputy.

This comes after Sandi Moyo and the vocal Mahoka were recently expelled from the women’s league following nationwide demonstrations against the two by irate party members.

A meeting of the wing’s top 50 office bearers subsequently endorsed that decision — referring the matter to the politburo for a final decision, which insiders said was a gimmick by the league to give the impression that “due process has been followed” in the matter.

Mahoka and Sandi Moyo have also been among the group of women’s league members who have been aggressively pushing for the revival of the debate about the need for a woman to become one of Zanu PF’s two vice presidents.

Their calls for a woman to be elevated to the presidency was seen as directed against Mnangagwa, as the appointment of the other VP, Phelekezela Mphoko, was part of the conditions of the country’s unity accord which resulted in the post of the second VP being reserved for senior former Zapu officials.

Analysts have said the surprise move by Grace to ditch Sandi Moyo and Mahoka — as well as this week’s hammering of Kasukuwere — were ominous signs for the G40 faction.

Political analyst Maxwell Saungweme said yesterday that Zanu PF was now “on the verge of implosion”, adding that “only the benevolence of Mugabe can save Kasukuwere”.

“Zanu PF is imploding . . . it’s boiling. Mahoka and Kasukuwere can also be described as the walking dead. But they can survive if they apologise to Mugabe or his wife, who are the alpha and omega in the party,” he said.

“The outcome of all this is unknown, partly because the person behind all this drama is a Machiavellian politician who thrives on creating divisions and indicating left when he is turning right.

“Yes, the demonstrations have weakened Kasukuwere, Mahoka and Sandi, but who is not weakened in Zanu PF outside the First Family?

“All the factions have been hammered, and sadly every time one faction is attacked, it is with the assistance of the other faction. They are constantly played against each other.

“This is all in the interest of one person having and serves to divert party supporters from asking the real question of the day. Which is, what a 93-year-old is still doing in State House.

“While the comments by the president castigating demonstrations appear to be in defence of Kasukuwere, at the same time it is clear that the initial demonstration had clearance from the highest office,” Hlatywayo told the Daily News. Daily News