A former Russian MP who fled to Ukraine last year has been shot dead outside a hotel in the capital, Kiev. 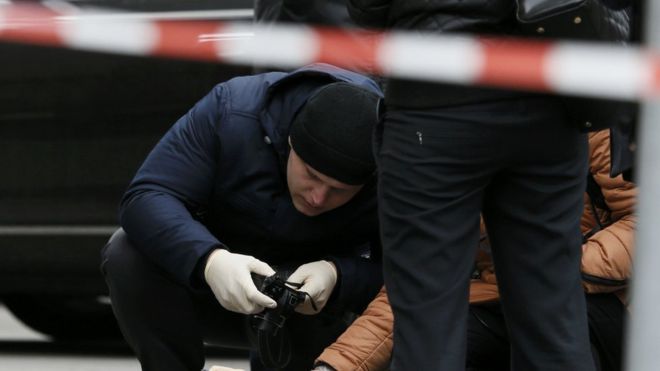 Denis Voronenkov and his bodyguard were attacked as they left the Premier Palace hotel in the centre of the city, reports say.

The bodyguard fired back at the attacker, who was shot in the head and chest and later died in hospital.

Mr Voronenkov was a controversial figure, who left Russia amid accusations of fraud.

President Petro Poroshenko went further, accusing Russia of “state terrorism”. He also linked the shooting to the series of explosions at a munitions dump near Kharkiv, in Ukraine’s north-east, describing it as the “signature style of Russian special services”

The Kremlin rejected his remarks as absurd.

Denis Voronenkov was elected as a Communist MP in 2011, married an MP from another party and backed a law limiting foreign ownership in Russian media.

But he left for Kiev late last year with his young son and wife, United Russia MP and opera singer Maria Maksakova.

Investigators were reportedly preparing a corruption case against him but were waiting for his parliamentary immunity to run out in December.

Russian opposition leader Alexei Navalny had also questioned how he had managed to build a fortune including two luxury flats on his salary.

In recent months Mr Voronenkov had given evidence to Kiev prosecutors in a high treason case against deposed Ukrainian President Viktor Yanukovych and had condemned Russia’s annexation of Crimea as illegal.

Although he had earlier backed the annexation in a vote in 2014, he said later that he had not been present at the time of the vote and another MP had used his card.

Russian opposition activist Ilya Ponomarev said Mr Voronenkov had been on his way to meet him and he insisted he was not a criminal.

“I’m speechless,” he said. “Voronenkov was no crook but an investigator who was deadly dangerous for the Russian siloviki [security services].”

Chief prosecutor Yuri Lutsenko suggested there were two potential motives for his murder.

The ex-MP had provided “very important” testimony in the Yanukovych treason case. But he had also played a senior role in a Russian federal unit investigating illegal drugs and smuggling, he said.

Russian media reports say Mr Voronenkov worked for an anti-drugs unit before being elected as an MP. BBC News