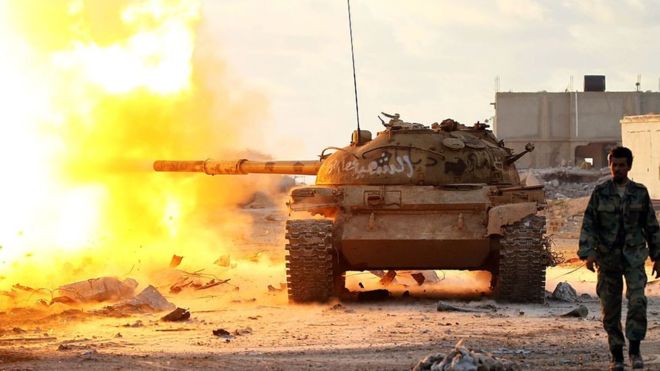 Ground, sea and air forces were engaged in the fight for sites at Ras Lanuf, Sidra and Ben Jawad from a rival Islamist militia, a spokesman said.

Meanwhile, Russia has denied reports that it has deployed special forces to the region in support of Gen Haftar.

Libya has been in chaos since the overthrow of Colonel Gaddafi in 2011.

The oil terminals had been seized by the Benghazi Defence Brigades (BDB) – a mix of militias that includes Islamists – earlier this month, which then handed them over to the Petroleum Facilities Guard, affiliated to the UN-backed unity government based in Tripoli.

Gen Haftar is allied to an administration based in the eastern city of Tobruk, which is challenging the authority of the UN-backed government.

Russia’s defence ministry denied allegations that it had special forces at an Egyptian base, some 60 miles (100 km) from the Libyan border.

“There are no Russian special forces in Sidi-Barrani. It’s not the first time such leaks from anonymous sources to certain Western media have got people excited,” defence spokesman Igor Konashenkov said.

The report by Reuters news agency, quoting unnamed Egyptian officials, had said that a 22-strong unit of Russian special forces were at the base.

The Egyptian military has also denied the reports.

In January he was given a tour of a Russian aircraft carrier the Admiral Kusnetsov in the Mediterranean and spoke by video link to Russia’s Defence Minister Sergei Shoigu.

Libya remains regionally split with two centres of power that politically oppose each other, and a myriad of rival armed groups that the country’s two governments cannot control.

Gen Haftar’s forces, known as the Libyan National Army (LNA), have been battling Islamist and other militias in the area since forcing them out of much of the country’s second city, Benghazi, in February 2016.