Beauty and the Beast: Disney rules out censoring gay scene for Malaysia 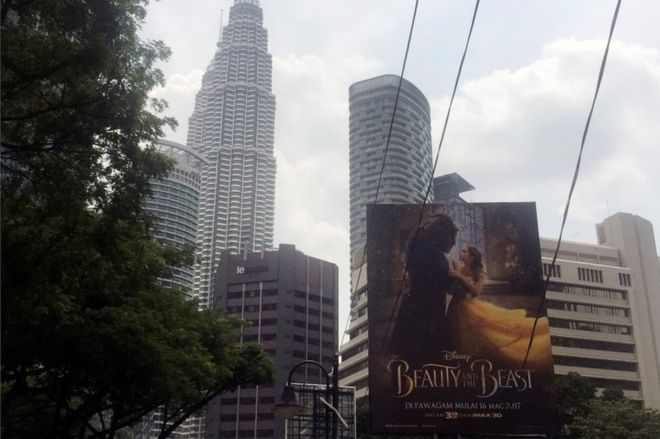 Disney has said Beauty and Beast “has not been and will not be cut” for Malaysia to remove a gay scene.

The live action film had been due to open in Malaysia on Thursday but the release is now in question.

The film has offended social conservatives for making LeFou, sidekick to villain Gaston, the first openly gay character in a Disney film.

Homosexual activity is illegal in Malaysia under both secular and religious laws.

It is punishable by a prison sentence or corporal punishment.

Gay characters can be shown in films, but only if they are portrayed negatively or repent.

The film’s director, Bill Condon, has said Le Fou “is confused about his sexuality” and that the film shows a brief “gay moment”.

On Monday, Disney said the release was being delayed in Malaysia for a “review” of its content, without giving further details.

Malaysia’s Film Censorship Board later said the film had been approved, after the scene was cut. It was given a P13 rating, requiring parental guidance for children under 13.

“It is only one short scene but it is inappropriate because many children will be watching this movie,” chairman Abdul Halim Abdul Hamid told Associated Press.

But Disney said in a statement to reporters on Wednesday that it would be making no such cuts and was postponing the release. It is unclear whether it will now be released in Malaysia.

Disney did not immediately respond to a BBC request for comment. BBC News