Caps Utd 2-1 Lioli FC (Caps Utd win 2-1 on aggregate) Ronald Chitiyo proved why he was rated Caps United’s biggest catch of the season when he turned what had appeared a certain disappointment into an afternoon of song and dance with a brilliant goal that secured Makepekepe’s passage into the first round of the Caf Champions League at the expense of a stubborn Lesotho side Lioli at the National Sports Stadium yesterday. 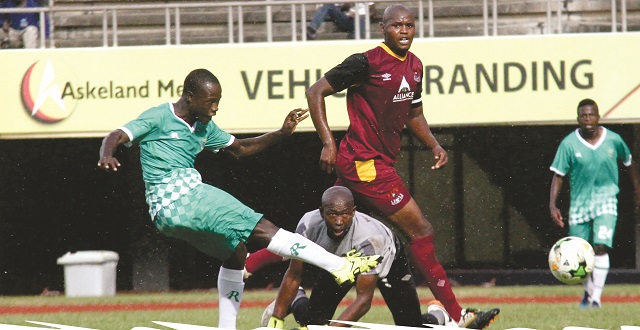 Caps United, who had played a goalless draw in the first leg in Maseru last weekend, started the game in the worst possible manner yesterday after conceding a 20th minute goal, courtesy of Tsepo Seturumane’s neat strike from the edge of the box.

With the away goal, there was a mixture of hope and despair as Makepekepe went to the half-time pep talk needing two goals to turn the tables.

But it was a different story on their return to the pitch, moreso after Barclays Bank managing director George Guvamatanga had visited the players’ changing room during the breather and dangled a $3 000 incentive if they won the match.

According to sources, the players got their money soon after the match and are now looking to realise their dream of qualifying to the lucrative group stage.

Chitiyo’s 57th minute finish, which came just about six minutes after Simba Nhivi had equalised, was enough to book the Green Machine a date with Democratic Republic of Congo giants TP Mazembe for a ticket to the group stage next month.

Makepekepe recovered dramatically after they had been given a big scare by their opponents who were highly mobile going forward in the early parts of the game, many thanks to goalkeeper Edmore Sibanda who made a string of fine saves to keep them in the game.

The Lioli players could count themselves unlucky as the visitors did everything they could, including taking control of the first half, in a demonstration they had come for a big fight.

But then Nhivi benefited from one of their goalkeeper Liteboho Makhehle’s blunders when he challenged for a floating ball into the box which the keeper spilled to give the striker the easiest of tasks to tap in for the equaliser a few moments after the breather.

And before the dust had settled, Chitiyo found an opening to kill off the game and he did it with aplomb.

The former Dynamos and Harare City man showed so much composure inside the box when he intercepted a low shot from Nhivi, expertly turned his man before slotting home.

Earlier on in the first half he had crashed his effort against the crossbar when he tried to lob the keeper from a distance.

He had another crack on target but Lioli defender Setshane Ramotseka appeared to have used his hand to keep the ball away after he was turned inside out.

Caps United coach Lloyd Chitembwe, who usually does not like singling out players for praise, said he was impressed by the character displayed by his charges in the second half.

“These boys are showing the kind of hunger that is needed to win games and in the second half they had that lift. It’s expected no team can play one and the same way the entire 90 minutes. The first 45 we were a little bit down and the second half I think the application was perfect,” said Chitembwe.

Caps United made three changes to their starting team yesterday with Tafadzwa Rusike, Simba Nhivi and Joel Ngodzo getting the nod at the expense of Cabby Kamhapa, Dominic Chungwa and Abbas Amidu.

But Ngodzo and Rusike failed to rise to the ocassion in the midfield, exposing the defenders to the constant threat posed by the visitors, who had started with four attack-minded players.

The introduction of Amidu and Kamhapa gave Makepekepe the mobility that lacked in the first 45 minutes.

“We responded very well. There was a lot of urgency, there was a lot of speed. Speed of thought was there, speed of reaction was very good and the speed of execution. I thought most of the aspects of speed were evident in our play today. I am very happy unlike the way we played in Lesotho. I am very impressed.

“The turning point in as far as I am concerned was in the substitutions that we made. ‘Fire’ (Tafadzwa Rusike), yes, he was good but in terms of giving us the forward thrust that we wanted I am sure he was not as expressive as we would have liked but with Abbas coming in I thought he was very expressive. The moment he had the ball he looked very threatening,” said Chitembwe.

But goalkeeper Edmore Sibanda could have been a huge contender for the man-of-the-match award for his heroics.

The big goalkeeper was the huge difference yesterday as Caps United staged a dramatic comeback to progress to the first round.

He was found on the right places most of the times and was called to rescue his side, including denying the opponents on point blank positions, after being exposed on several occasions by his defenders.

Supporters at the end of the match chanted his name and blessed him with cash gifts.

“That’s the reason he is there. He is there to do exactly that. If he doesn’t do that, then he is not doing his job,” said Chitembwe of Sibanda’s heroics.

If anything, Caps United would need to polish their central defence which featured Justice Jangano and Denis Dauda.

The duo was prone to schoolboy errors, reminiscent of the first leg in Lesotho where they were lucky not to get punished.

However, Chitembwe said they expect to see change in their erring defence by the time they play TP Mazembe.

“It’s still work in progress. I am sure we still have a lot of things to work on and improve on but we also would like to understand that we are still in our preparation period.

“The (domestic) season hasn’t kicked off yet and this is expected. No team is sharp in their first one or two games. Hopefully by the time we hit five or six games thereabouts I’m sure we will be sharper and very competitive,” said Chitembwe.