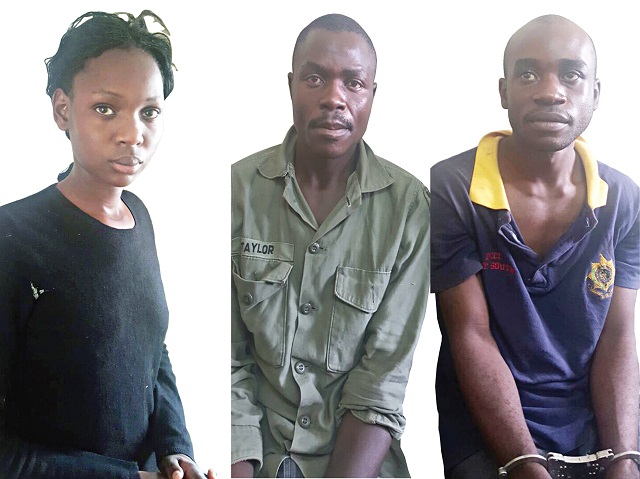 Police have arrested two Beitbridge men and a woman for mounting an illegal road block along the Beitbridge Masvingo Road where they posed as detectives from the Minerals and Border Control Unit.

Albert Bako (25), Blessing Moyo (25) and Tanaka Mino (19) were busted by alert police officers at the 70km peg near Bubi Village, soon after extorting R3 700 from a suspected smuggler.

He said the three are facing charges of impersonation and extortion.

“Preliminary investigations reveal that the trio connived to mount an illegal roadblock along the Beitbridge Masvingo highway.

“They trailed a Nissan 1 tonne truck from Beitbridge town, which they suspected to be carrying smuggled goods.

“When they reached the 70km peg they flagged the driver to stop indicating that they were police detectives from the Minerals and Border Control Unit,” said Asst Insp Sibanda.

He said the trio then extorted R3 700 from the motorist who paid the money and drove off to an official roadblock, which was 10km away, where he made a report.

Asst Insp Sibanda said when the police reacted they found the trio still preying on other motorists at the same spot.

“We want to strongly warn malcontents and those of like mind that the law will descend heavily on them,” said Asst Insp Sibanda. Chronicle

Warrant of arrest for Trynos Nkomo

Sixty two in burning bus. . . ‘Ball of fire’ at 5AM on Harare-bound cross-border…