Zimdancehall chanter Shinsoman shocked all and sundry at the weekend when he burst on stage during the Miss Tourism Zimbabwe finals spotting a marijuana suit in front of the First Lady, Dr Grace Mugabe. 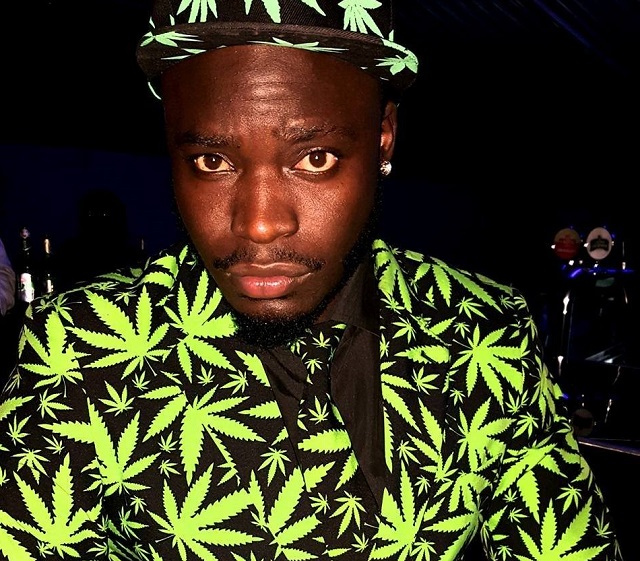 Shutting down the glamorous event where most had dressed to the nines, Shinsoman came on stage amid wild cheers from fans and when they realised he was promoting the smoking of weed in the country, they could not help but gasp in bewilderment.

Most said Zimdancehall artistes needed to take themselves more seriously by respecting themselves and organisers of events.

“Shinsoman may want to take himself more seriously by dressing appropriately. Just how did he choose this outfit, especially when he knew the First Lady was going to be there as she was the guest of honour,” said a person in the crowd who preferred anonymity.

“He must look at other artistes like Dr Malinga, Busiswa and Ammara who performed on the same stage. They were decently dressed and he just had to be the odd one out, killing the fun.”

Fortunately, as Shinso took to the stage, the First Lady and other respectable guests were on their way out, saving them from being exposed to such indecency.

Shinso has however, apologised for wearing the marijuana outfit saying he did not realise the magnitude of the event.

His manager, Peter Chiyangwa, said: “The outfit was not appropriate for the event. It was an error on our part and we apologise for that as we didn’t realise that the First Lady would be there.

“It was probably the excitement of being called to perform at such a great event so we wanted to look extraordinary.

“Those Jamaican people whom we draw inspiration from smoke ganja and so forth so we just thought of wearing the ganja suit as a symbol that we also believe that ragga originated from the smoking of ganja.