Chaos could once again engulf Harare today as pro-democracy groups mount yet another demonstration in the capital, to protest the country’s deepening political and economic crises, as well as the government’s reluctance to implement much-needed electoral forms ahead of the eagerly-anticipated 2018 polls. 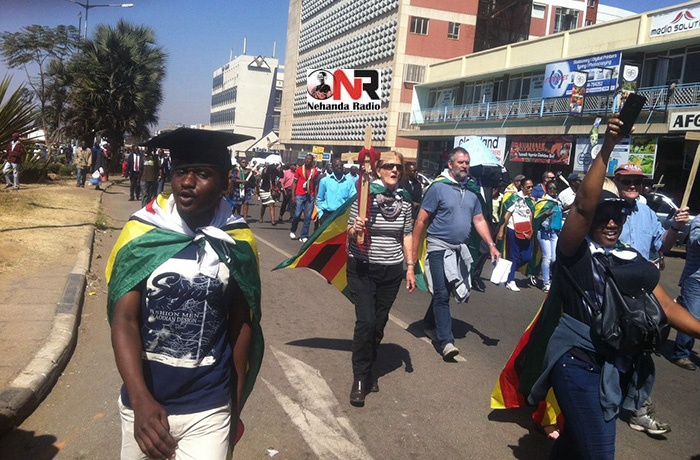 And most ominously for the capital’s residents and visitors alike, panicking authorities have already given notice that the planned mass protest will once again be dealt with severely by law enforcement agents, as police had not cleared the demo.

The demo also comes as the country’s powerful, over-arching security structure, the Joint Operations Command (JOC), has forced the leaders of the major opposition parties to abandon the protest after the uncompromising securocrats demanded to know the conveners of today’s planned mass action, so that they can hold the concerned people accountable in the event of riots.

However, radical pressure group, Tajamuka/Sesijikile, and the youth wings of the 18 political parties coalescing under the banner of the National Electoral Reform Agenda (Nera), have vowed to press ahead with the demonstration.

Sithole rejects claims MDC youths want him out for being…

New clashes in Guinea as toll from unrest rises to six…

“We are going to march peacefully from corner Jason Moyo and Julius Nyerere Way to Parliament, to protest against Mugabe’s unacceptable solution of clandestinely introducing bond notes as the panacea to the economic problems we are facing as a country,” MDC youth assembly president Happymore Chidziva told the Daily News.

“We are going ahead with or without the clearance because we are going to be engaging in a peaceful march. We have gathered that the police are not keen on clearing the demonstration and our legal team will be approaching the courts. But whether they succeed or not is immaterial because the preparations have reached an advanced stage.

“We know the authorities will resort to their usual ways of trying to arrest, abduct and even kill us, but that is the name of the struggle. We are used to it and are not scared.

“If anything, the authorities’ heavy-handedness is what gives us the power to fight even harder. It emboldens us and other youths from various groups including Tajamuka, Youth Alliance, Zinasu and others, who are all ready for action,” added the tough-talking Chidziva.

Today’s demo comes almost two weeks after security agents foiled another planned protest by pro-democracy groups, following the abduction and torture of some of the organisers on the eve of the gathering.

Then, suspected security agents left for dead Patson Dzamara, the young brother of missing journalist-cum-democracy activist Itai, after kidnapping and severely torturing him for hours before the planned demo.

MDC spokesperson Obert Gutu said yesterday that Mugabe and his government would not relent unless they were pressured to act on the country’s deepening economic rot which had eroded all the gains which had been made during the era of the inclusive government.

“Mugabe loathes demonstrations because they expose him as the ruthless, intolerant and corrupt dictator that he is. No dictator in the world is ever comfortable with demonstrations by oppressed citizens. The people are fed up with the Zanu PF regime.

“People have to demand their freedom from this Zanu PF dictatorship. The regime will never, ever resign from power without the people exerting consistent and concerted pressure using peaceful and constitutional means,” Gutu told the Daily News.

A senior researcher with New York-based Human Rights Watch (HRW), Dewa Mavhinga, said pro-democracy groups needed to unite and shake off their association with opposition parties if they were to succeed in their demonstrations.

“It is important for Zimbabwe’s various protest movements to come together and to be united by a common cause to change the situation without being too aligned to political parties.

”Protest groups must move towards a broad-based movement that transcends political affiliation. When that happens, Mugabe and his government will be forced to address people’s grievances in a serious way.

“At the moment, the government is isolating and targeting protest leaders who they perceive to be lone-ranger activists who are disconnected from the masses generally,” Mavhinga said.

The government signalled its intention to crush today’s demo when police arrested Tajamuka leaders Promise Mkwananzi and Mehluli Dube on Monday, after they addressed a media briefing ahead of the protest action.

Home Affairs minister Ignatius Chombo also said yesterday that it was wrong for pro-democracy groups to protest, especially after the government had introduced the bond notes to ease the country’s dire cash crisis.

“My workers at the farm are happy that they now have money, so why demonstrate? You don’t want money? Unless you are getting money from somewhere else,” he said as he revealed police had not been approached to clear the protests by the organisers.

At the same time, the government was also ramping up the deployment of police and other security agents in and around Harare, with water cannons and truckloads of riot police parked near Parliament, in preparation for today’s demo.

Last week, heavily-armed riot police littered all the main streets leading into the capital’s Central Business District (CBD), where they mounted dozens of roadblocks and conducted random searches on ordinary Zimbabweans going about their daily chores, and causing immense traffic chaos during both the morning and afternoon rush hours, in preparations for the aborted demo by Nera. Daily News

I warned Chamisa not to appeal against Khupe court ruling – Komichi