Egypt defeated Ghana 2-0 in Alexandria on Sunday to go top of their 2018 World Cup qualifying group as the Democratic Republic of Congo came from behind to win 2-1 in Guinea and move top of Group A. 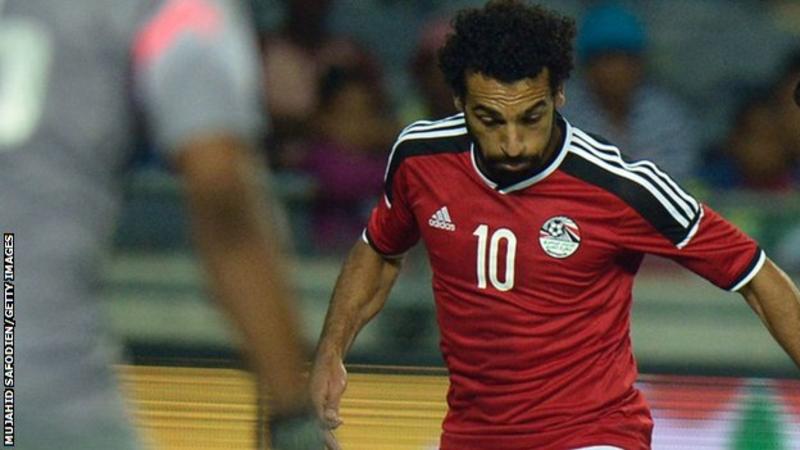 Goals from Mohamed Salah and Abdallah Saied gave the Pharaohs the victory.

The result means Egypt are two points clear at the top of Group E.

Ghana are already in danger with just one point so far, but with four more qualifiers to come.

Roma’s in-form winger, Salah, struck his spot-kick firmly into the middle of the goal to put his side ahead.

Salah had also come close after 25 minutes with an effort from close range but Ghana came back strongly after half-time, with Egypt’s 43-year-old goalkeeper Essam Al Hadari making key saves from Christian Atsu just after the hour mark and Emmanuel Agyemang Badu in the 79th minute.

Saied then scored on the counter attack with five minutes to go to ensure the victory as Egypt bid for a first World Cup spot since 1990.

In the play-off for a place at the 2014 World Cup in Brazil, Ghana hammered Egypt over two legs to qualify for a third successive finals appearance.

Uganda are second in the group, two points behind Egypt, following their 1-0 win over Congo Brazzaville in Kampala on Saturday.

Democratic Republic of Congo regained first place in Group A on goal difference from Tunisia after a 2-1 comeback victory over Guinea in Conakry.

The match was won through two goals in quick succession during the second half from England-based attackers.

Seydouba Soumah had raised Guinean hopes of a first group win by converting a 23rd-minute penalty.

DR Congo and Tunisia have six points each and Guinea and Libya are pointless in the only group where two teams have won both their opening two matches.

Only the five group winners will qualify to represent Africa at the 2018 World Cup in Russia. BBC News