Zimbabwe’s newspaper editors often find themselves consulting newspaper vendors on lead stories as competition to sell their papers threatens the viability of most publications. 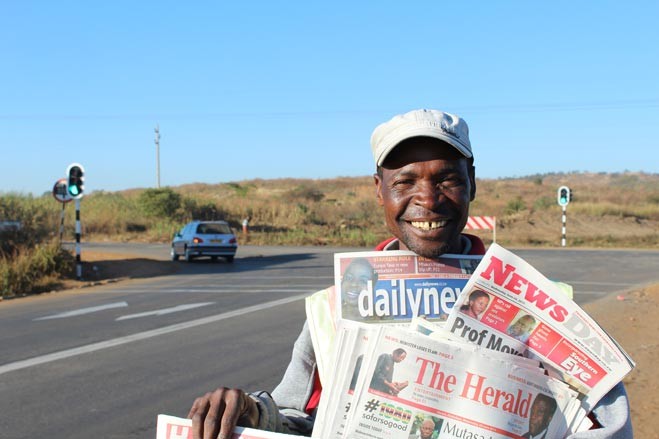 This came out at a recent Voluntary Media Council of Zimbabwe (VMCZ) meeting with members of the Zimbabwe National Editors Forum (Zinef) in Harare on Saturday.

Because of poor headlines, they have had to see heaps of their papers being returned after recurrently poor street sales.

“When I was editing at AMH (Alpha Media Holdings), we also had periodic meetings with vendors and the vendors said ‘if you listen to us, the paper will sell’, and sometimes we did.

“That’s why you find that sometimes all three national newspapers sometimes have the same headlines…you can see the influence of the vendor.

“Vendors are actually a stakeholder because that’s their survival…but what kind of a headline does the vendor want. It has got to be sensational.

“…That never used to happen before competition came in.”

Daily News assistant editor Maxwell Sibanda, together with publisher and editor Barnabas Tondhlana admitted editors sometimes got “hints” on the best headline of the day from vendors.

Madanhire admitted this had lowered journalism standards in the country adding that the current generation of journalists were not ready to “sift fact from fiction” and were ready to parrot the factional narratives thrown at them by Zanu PF politicians or prophets accused of corruption.

He emphasised a return to the truth by the local media.

Some editors expressed discomfort with what they termed editorial intrusion by newspaper owners, politicians and advertisers on some stories viewed negative to the papers’ funders.

They also said the marketing and sales departments in their companies would frequently try to influence the type of stories to publish for fear of upsetting advertisers.

Media Monitors of Zimbabwe director Patience Zirima, who was also guest speaker, bemoaned what she said were apparent fingerprints of media owners in the coverage of some stories.

She singled out the fixation on Higher and Tertiary Education Minister Jonathan Moyo’s corruption scandal by the state media in a country rampant with high level corruption.

Zirima also denounced the continued use of unnamed sources on highly libelous articles by newspapers and the one sided sourcing of stories by journalists who are not too keen on balancing their stories.

She said some newspaper stories were not factual, were fraught with inaccuracies and were stereotypical and also insensitive to issues of vulnerable groups such as the physically challenged and women.

Zirima bemoaned gender discrimination by the local media which was not keen either to use women’s voices in their commentary. Radio VOP