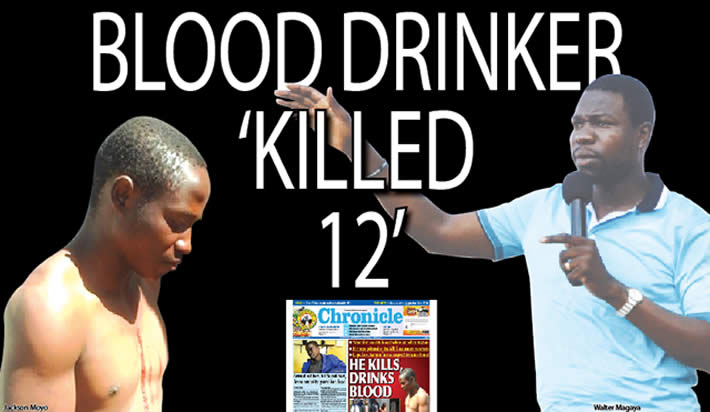 Jackson Moyo, the alleged blood sucking rapist and killer arrested in Mvuma, could be the country’s most prolific serial killer after confessing to killing 12 more women in Bulawayo and parts of the Midlands province.

Police sources said Moyo, 26, of Baradza village under Chief Jiri in Gokwe South, who was arrested on Wednesday, was yesterday taken by Bulawayo CID Homicide for indications in the city where he is facing three charges of rape and murder.

The sources said Moyo, a self-confessed satanist, confessed to killing three women in Bulawayo and nine in the Midlands during a spree extending from early last year to April this year.

Among Moyo’s victims in the Midlands are two women who were allegedly raped and their bodies found in an advanced stage of decomposition in Zvishavane last month.

‘Vampire killer was paid to murder’

Police arrested Moyo on Wednesday after tracking him using a cellphone that he had stolen from one of his victims, Privilege Mutara, a milk vendor.

Moyo gave the phone to a prostitute in Mvuma as payment for sexual services rendered.

“The suspect could not be taken to court today following his arrest because he was taken to Bulawayo for indications in three similar cases he committed there. He has also confessed to killing nine women in Midlands province, two of them in Zvishavane,” said the police source.

The police said Moyo used the same method to rape and murder 12 women in different places and was mainly targeting vulnerable women.

He said investigations were still going on.

“We’re still investigating the case. The suspect will soon appear in court once we finish investigations and preparing the docket for any other case that he would have been charged with,” he said.

Moyo once made headlines after he allegedly disappeared from a cleansing prayer session at Prophetic Healing and Deliverance Ministries (PHD) in Waterfalls, Harare.

PHD leader, Prophet Walter Magaya, was praying for Moyo before he disappeared. The man was found at an Apostolic Faith Mission Church in Ngundu, Chivi.

Moyo attempted to rape a Chicken Slice employee who was on her way home after work. The woman was, however, rescued by a passerby who heard her screaming. The passerby chased after Moyo but the suspect managed to escape.

The suspect caused a stir at Mvuma Police Station on Wednesday when he claimed that he was a satanist.

He claimed that he was being used for ritual purposes by his colleagues from the underworld.

Moyo said he was initiated into satanism by some Nigerian businessmen whom he met in Zambia sometime last year when he went there in search of employment.

He said the Nigerians approached him while he was working at a lodge in Zambia and burnt frankincense and was immediately incorporated into satanism.

Moyo alleged that his group was supposed to kill four more women and drain their blood for ritual purposes before being attested into the elite group. He said their sect thrives on human blood. The Chronicle

‘Vampire killer was paid to murder’