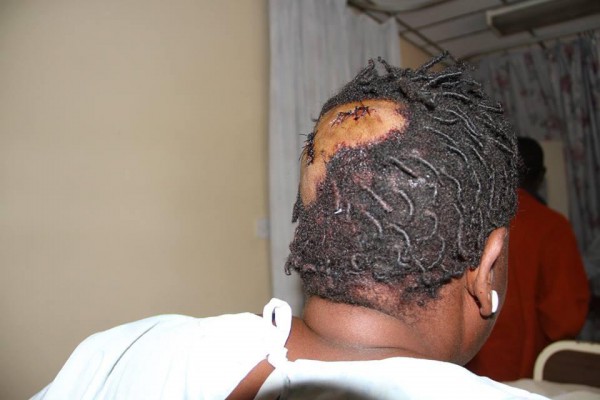 The ugly face of political violence reared its ugly head on Sunday when Zanu PF thugs stormed an MDC-T rally addressed by party leader Morgan Tsvangirai in Epworth near Harare.

According to reports the thugs indiscriminately threw missiles at MDC-T supporters, leaving 14 of them seriously injured. The incident happened soon after Tsvangirai had finished his speech and left the venue.

According to MDC-T National Organising Secretary Nelson Chamisa “Zanu PF brought people after the singing of the national anthem and prayer, they started attacking people. Our youths did what they could for their safety instead of retaliating.”

There was chaos for about 5 minutes before riot police intervened and threw teargas canisters to disperse the crowd as MDC-T activists fought back to defend their territory.

“The police had to use teargas, but the problem is they denied us the chance to conduct our meeting at our usual venue which is questionable.

Perpetrators of political violence will be severely dealt…

‘Our choice not to be violent must not be mistaken for…

“The police denied us to use the initial traditional venue PaDombo. Several people were beaten up; a lot of senior citizens were beaten up. Zanu PF’s DNA is violence. They believe in throwing stones,” Chamisa is quoted saying.

On Monday the MDC-T Leadership including Tsvangirai and Chamisa visited some of the victims who were admitted to hospital after the raid by Zanu PF thugs.

Speaking to journalists after the visit  Tsvangirai said: “What is important to emphasize is that when Zanu PF sees people on the roll, it turns to its default mode which is violence, fear and intimidation. We need to recognize that the MDC is a popular movement while Zanu PF has a challenge of converting their harvest of fear, violence and intimidation into popularity.”

Tsvangirai added that even in the face of violence, the party would continue to engage the people.

On his visit to hospital today, Tsvangirai was accompanied by the Party’s Shadow Minister for Home Affairs, Lillian Timveous and Organising Secretary, Nelson Chamisa.

We will have our own party name: Biti