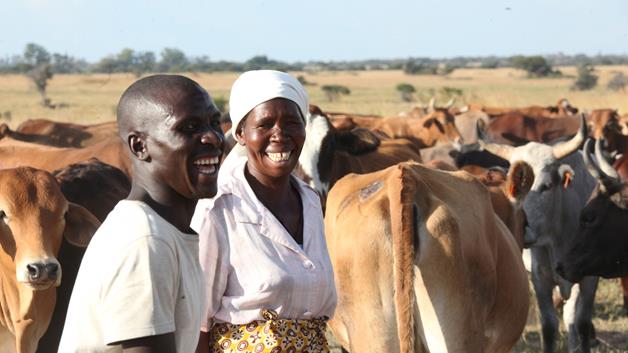 A new bank in rural Zimbabwe does not have air conditioning or smartly dressed clerks – instead it has cow dung and labourers wearing overalls.

In fact its branches are farms and its employees often go out to collect their deposits from their customers. One such customer, Stephen Chikoto, looks on as his calf darts around the cattle enclosure, trying to avoid being lassoed for inspection.

“Perhaps, it doesn’t want to be banked,” he quips.

Mr Chikoto, small-scale farmer from Zvishavane district about 390km (240 miles) south of the capital, Harare, is in the process of depositing his calf and eight other animals into the TN Livestock Trust.

An assessor from the department of agriculture overseeing the transaction checks the calf’s teeth for its age and then punches a yellow tag into its ear.

With the calf weighing in at 200kg (440lbs), Mr Chikoto has deposited the equivalent of $190 (£116) – a considerable amount in rural Zimbabwe. As part of the deal, he must agree to leave the animal in his “cow account” for two years.

In return he will earn interest, currently set at 10%, and will also receive a cow certificate which can be used as collateral to obtain loans which could be used to grow their business.

The calf will be now be taken to a TN Livestock Trust farm at Featherstone, about an hour-and-a-half’s drive south of Harare.

“We bank them at our farms,” says Charles Chakoma, the trust’s manager, adding that it is a win-win set-up.

“The farmers get to unlock the value of their cattle without necessarily selling their cattle. We look after the cattle for them,” he told the BBC.

“They can use the cattle as collateral. They can do other projects which they so wish to do at their homestead, whilst retaining ownership of the cattle.”

Mr Chakoma explains that the quality of most livestock held by small-holder farmers in Zimbabwe is deteriorating because of inbreeding.

“We give them better bulls, pedigree bulls. We are trying to also use indigenous bulls,” he says.

“They can get better animals back.”

Mr Chakoma says there is a tendency to underplay the economic status of those in rural areas.

It is estimated that they own about 3.3 million head of cattle, worth about $1bn.

That accounts for about 80% of the national herd, now just half its size in 2000 when the government’s controversial redistribution of commercial farms began.

The cash cow scheme removes the burden from rural families of caring for cattle which often falls to young boys, Mr Chakoma says.

“Sometimes children are disturbed from attending school,” he says.

In the year since the scheme opened, some 600 cattle have been deposited. For Mr Chikoto, it is indeed a relief as he has lost cows in the past as his land is arid and with high unemployment, cattle rustling has also become a big problem.

“There is a lot of drought every year,” he says.

“I know that I’m not going to lose anything in both directions. Both parties are winning.”

But the cattle banking model has its sceptics, like Christopher Mugaga, head of research at Econometer Global Capital, a regional finance and economics research firm.

“It’s a case of putting the cart before the horse,” he told the BBC.

He believes the whole business of agriculture has to be reformed, given that controversy still surrounds property rights for commercial farms where 99-year leases are still being issued as opposed to title deeds.

The cow banking scheme puts the onus on small-scale farmers to increase the national herd instead of commercial farmers, he says.

“You realise that cattle banking, as much as it sounds noble, Zimbabwe at the moment is not yet ripe to embrace such a concept.”

But Mr Chakoma bats away such concerns and says the trust, which is opening up a second farm in Gweru, has even managed to overcome cultural hurdles.

Traditionally a bride price, known as lobola, must be paid by a groom’s family – usually in the form of between five and 10 cows, each worth an estimated $450.

Now cow certificates can be exchanged instead after the customary marriage formalities have been concluded.

“You tell us: ‘Remove so many animals, I want to pay them as bride price to so and so.’ We issue another certificate in their name.

“If they [the new in-laws] so wish to retain them with us, they can do so. If they want to come and get possession of their animals, they can do that.”

Mutodi claims Kaukonde bribed magistrate with US$3000 to acquit rapist

You Fought A Good Fight: Rest in Peace Madiba

US$50 tax on mobile phones retrogressive and outrageous – top economist